As I started to learn Spanish, I found that studying Spanish was great, and it had any benefits, but I needed something else to reinforce the learning. I got to the point where I could read and write Spanish pretty well, but if I were to engage in conversation on the street, I constantly found myself frustrated. I had to search for words.

I would find myself immediately switching back to English mid-sentence if I couldn't remember the word I was looking for. My sentences would sound something like “Ella está in the car.”

Then I’d catch my bearings. I’d think of my niece when she was two or three years old. When she was learning to talk, there would be things that she said that were grammatically incorrect. For example, “I did it” was “I doed it.” She got the overall concept down, but wasn’t quite there. Now that she’s five, she has a pretty firm grasp of language.

She wasn’t afraid to talk or to make mistakes. She was just talking. She was having fun, and so were the adults who got to listen to her.

It got me thinking, what if I learned Spanish in the fun and fearless way my young niece learned to speak English?

What I learned is that we all have different ways to learn. Some people respond very well to academic environments where you read and memorize a lot. Others learn best by doing. Some learn by listening. In learning a new language, we tend to respond best to a combination of environments, though we may have one dominant learning style. These are the most common learning styles:

Kinesthetic: People who learn best by touch or by physical activity. This is commonly referred to as tactile learning or hands-on learning.

Visual: People who tend to learn best by seeing information in pictures, charts and graphs.

Read/Write: These are people who learn by taking a lot of notes or will turn charts and graphs into words.
When we focus our learning more towards our dominant learning style, we learn faster.

How to Make Learning Fun and Fast

Given that I wanted to make learning Spanish fun and I wanted to incorporate different learning styles, the best way to do that is by playing games. I love playing games, especially board and trivia games. I also realized that by having a fun time making mistakes, I was essentially learning. These games below will help you with different aspects of the learning process and they incorporate different learning styles to help you learn faster.

Scrabble has long been one of my least favorite board games. When I learned that there’s a Spanish version of this classic board game, I thought ’ would give it a try. I don’t know why, but the version en español is so much more fun and challenging. This is a great way to improve your Spanish vocabulary and keeps the language fresh in your mind. And when you’re playing with people who are at a similar level as you, it can be ridiculously fun. Be prepared to laugh a lot and have a Spanish dictionary handy.

You can purchase your own Scrabble en Español board game at Amazon.com

Hangman is a classic game that doesn’t require much. Two people with creative minds, a piece of paper and a pencil. 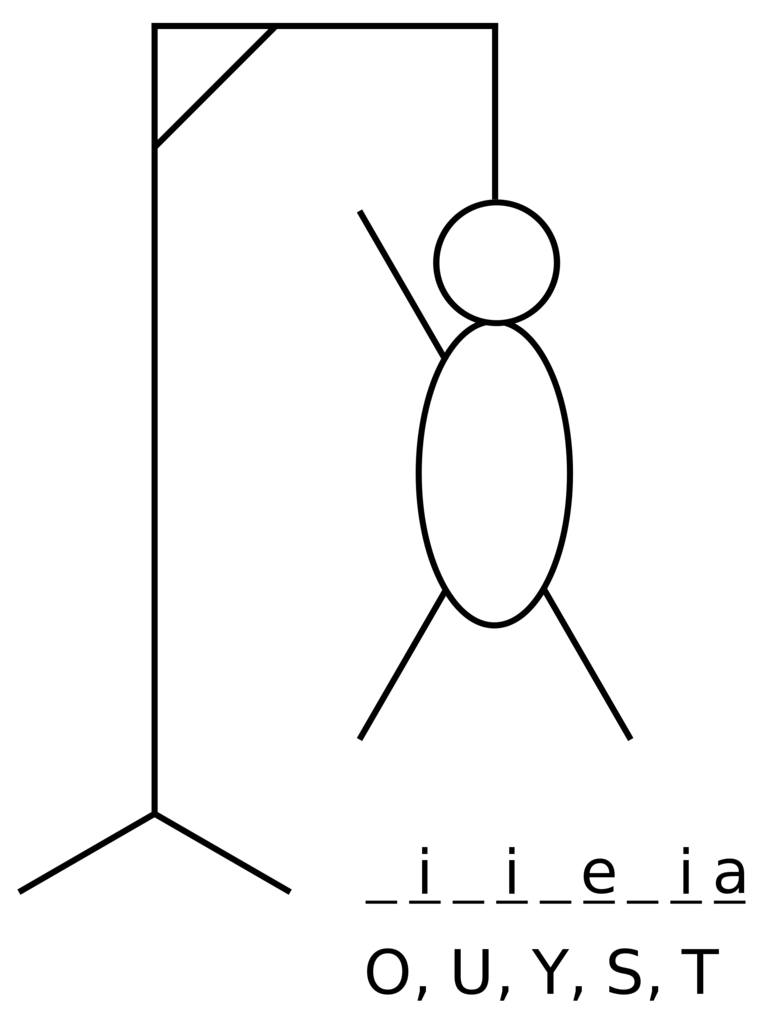 The rules are pretty simple. Person #1 creates a word and does not share it with anyone. On the piece of paper, they will out small lines for each letter of the word.

The object is to guess the word before the entire Hangman is drawn.

Here’s a tip: In English, when you’re playing Hangman, there are common letters that people start with – usually E, R, S, T. In Spanish, the most common letters are E, A, O, S and N.

When I was in college, I picked up a study tool that I have used ever since. It got me through graduate school, a personal training certification, exams and more. Flash cards are a very simple tool to use. I would use them as a vocabulary learning tool, and I’d also use them to learn larger key concepts. I wrote the key concept on the front, with bullet points on the back side. Reviewing the flash cards over and over in my head and saying them out loud helped me learn faster. I also aced my exams.

The three best ways to use flash cards are for conjugating verbs, vocabulary words, or common phrases or questions. 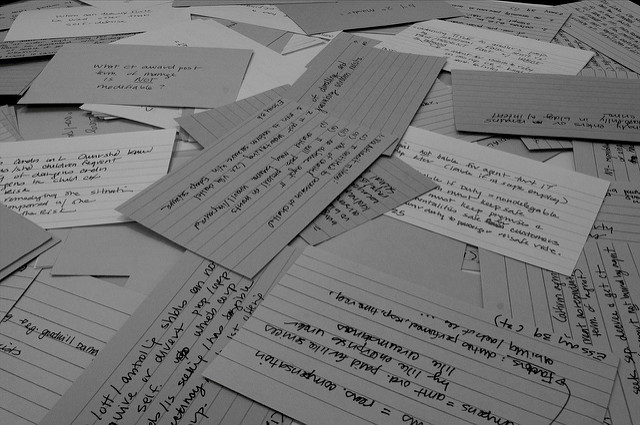 For conjugating verbs, just have the verb on the front and how it’s conjugated on the back.

In the age of technology, it’s easy to rely on tablets and phones and laptops. Did you know that these methods can actually hinder performance?

The only potential downside is having the space for a lot of cards. Rubber bands work pretty well to keep them organized or you can get a container or two just for index cards.

When I was a kid, I had the best babysitter. She was my godmother’s daughter and she made a game out of everything, even making Jiffy Pop. One of my favorite games that I remember to this day is a version of the Price is Right. I remember as a kid having so much fun trying to guess how much my parent’s refrigerator cost, or the air conditioning unit, or the couch or the kitchen table. We’d use pretty much everything in the house.

It’s also a wonderful game to learn Spanish. It’s pretty easy to implement and a great way to learn what everyday items are called. You do need at least a couple of people to play. Ideally 3-4 people to make it really fun and interesting.

Here’s how to play:

Assign someone to be the host. The other players will be the contestants. If you’re in a large group such as a classroom, divide the room into groups of 2-4 (depending on group size).

The host will go around the room with post it notes, the bigger the better. On the reverse (sticky) side, the host will write down the price of the item. Everyone can agree before hand if the prices are according to the country where you’re living in or planning to visit, if the item is to be bought new or as is, since all of those factors determine price.

If you need additional ideas on implementation, here’s a handout from an educational website that will help you implement the Price is Right.

The Alphabet Game originally aired in the UK in 1996 and 1997 (and recently was remade into a game show called Alphabetical). Since then, it’s been adapted in Spain, Argentina, Columbia, France, Italy, and Turkey. In Spain, Columbia and Argentina, the show is called Pasapalabra, which literally translates into Password.

In Pasapalabra, two teams of three (one contestant and two celebrities) square off against each other in a series of 5 “tests” during the hour long show. . The object of the first four tests is to amass enough time to complete the final round.

The final round is called El Rosco, where contestants go through a wheel of letters of the Spanish alphabet. The host will read the definition of a word that starts with or contains that letter. The contestant has to say the correct word or Pasapalabra to pass. The contestant who completes the wheel in the time allotted wins the money jackpot. 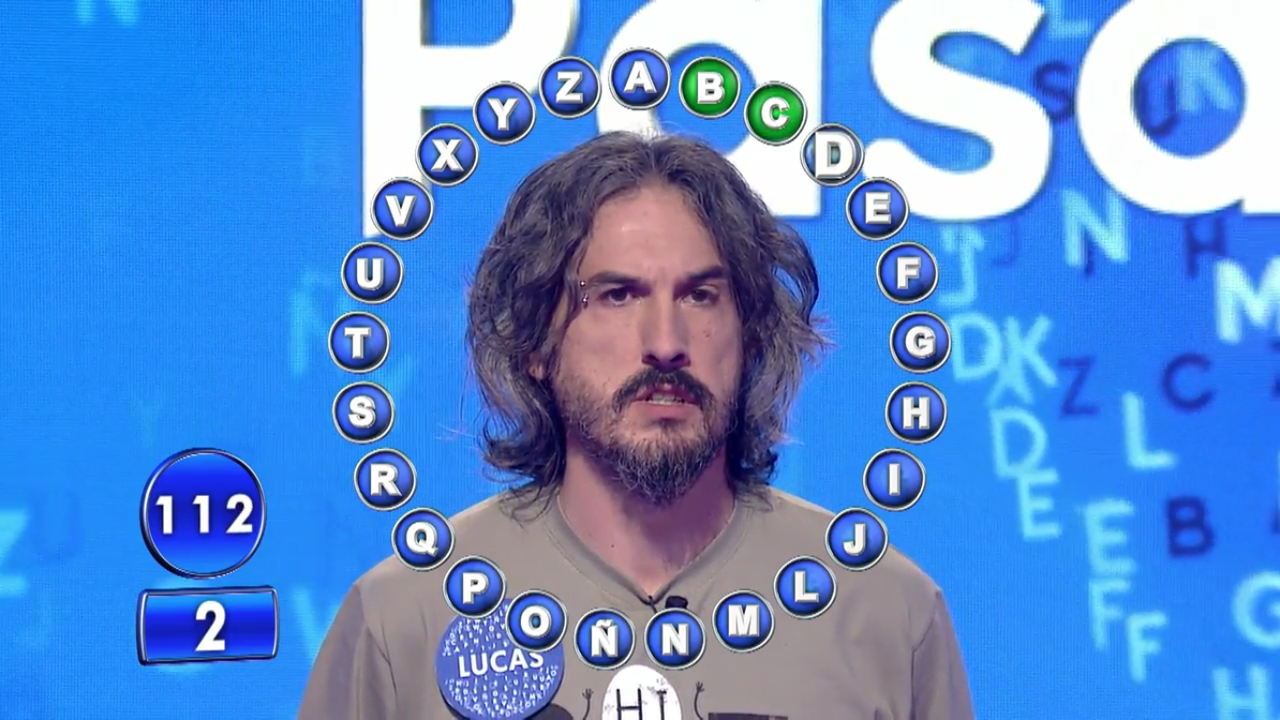 To create this part of the game at home, you can use the flashcards recommended earlier in this post. You can play this on your own or have someone read the definitions to you. To set up the game, you can create your own alphabet wheel.

Now, set your timer. Start with good amount of time like 2-2 1/2 minutes. In future rounds, you can cut the time down by 15 seconds until you have it down to 45 seconds. I think that if you have a firm grip on the flashcards and can get them out in 45 seconds, you can create more flashcards to challenge yourself.

All of these games and activities are fun, help reinforce learning by incorporating different learning styles and improve your vocabulary. Once you improve your vocabulary and feel confident there, it does become much easier to learn the nuances of the language, like grammar, tenses, and pronouns. By having a solid vocabulary as your foundation, you’ll have more confidence and a higher capacity to learn.