It's 2017. There are tons of blogs out there on learning Spanish, but which ones are worth your time?

It turns out, some blogs are better than others. For example, after learning about the same por vs para rules for days on end, it might not seem like there is too much to say about the topic.

Quite a few blogs did not make the list, not necessarily because they were of poor quality. Rather, despite doing my research on the topic:

Here are some of the top up-and-coming blogs of 2017 that clearly stand out and why.

In no particular order, here they are: 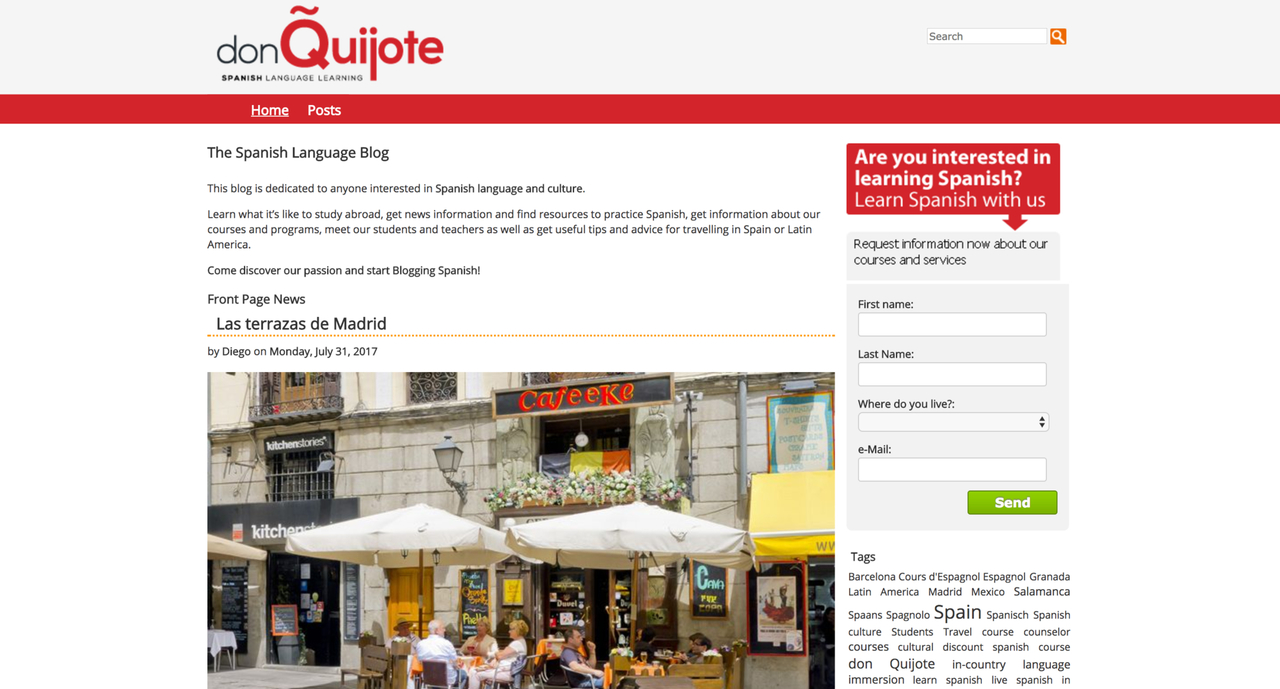 Starting off the list, we have Don Quijote, a travel-themed blog that writes about learning European Spanish. For people who enjoy sightseeing, the articles go in-depth with beautiful pictures of destinations worth visiting as well as tips on what to do abroad.

Why it stood out: What I find special about Don Quijote is that all articles are translated, by hand, into both Spanish and English versions. So while learning about Spanish, you can read the article itself in Spanish and have a transcript alongside it.

The articles are never about pronunciation rules or grammar but rather about everything from regional candy in Spain to relatively unknown carnivals in Latin America. I find these articles to be well-researched and with content that cannot be found easily on travel guides. 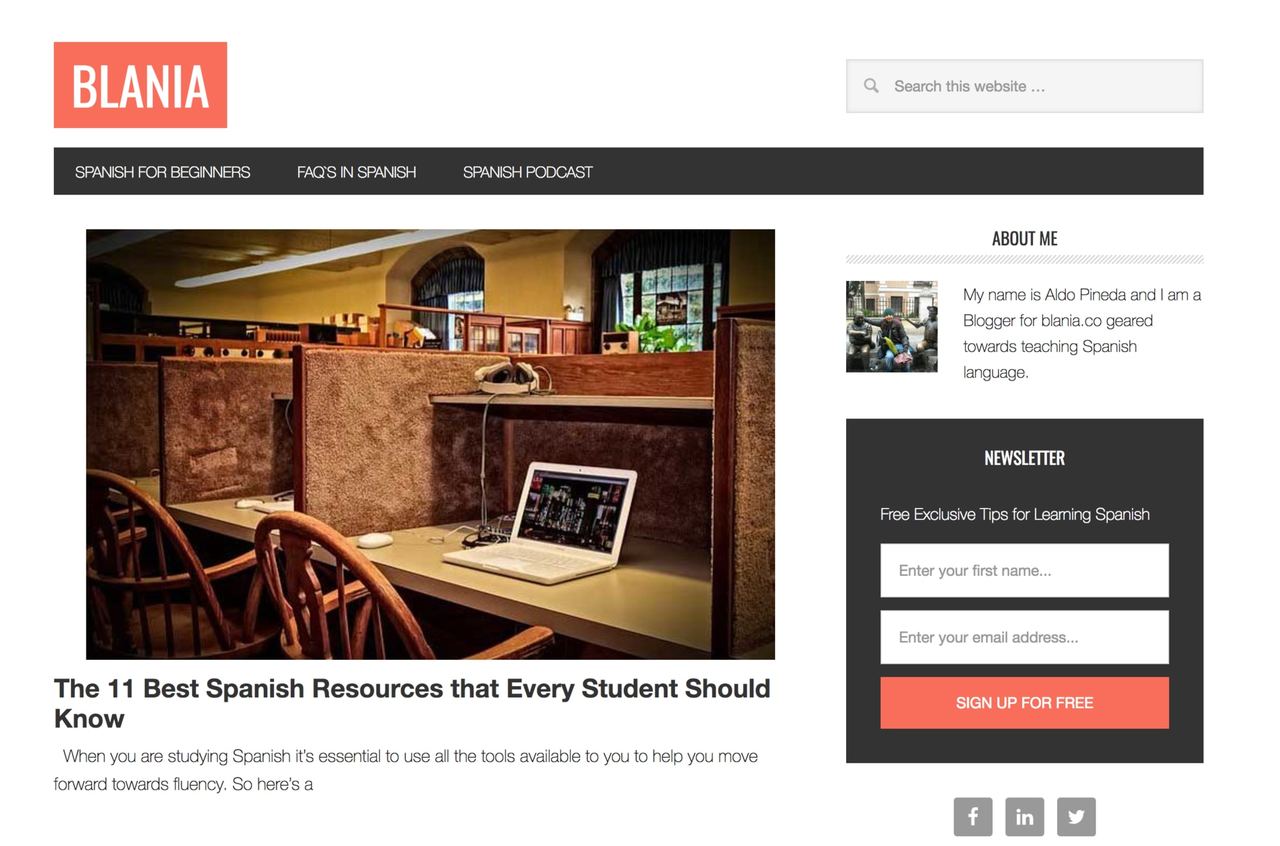 Blania is a website and podcast geared towards teaching the Spanish language.

The article that stood out for me was an in-depth article about the pros and cons of studying Spanish in Mexico and Spain. For many practical real-world questions such as this, it provides a clear perspective without an ulterior motive or agenda. Quite a few of Blania's articles are geared towards the practical aspects of the Spanish journey; from tracking students' journeys through learning Spanish, to providing inspiration, tips and tricks for people struggling with pronunciation.

Why it stood out: I found the real treasure of Blania, and what makes it stand out from the crowd, the absolutely amazing podcast. It recounts the journeys of Spanish-speaking students. I found the website to be very thorough in providing accurate transcripts of the interviews given. All episodes provides a transcript along with key vocabulary words.

Given that this is something for which many other companies charge, I recommend Blania as a resource for accurate, detailed and informative transcripts. 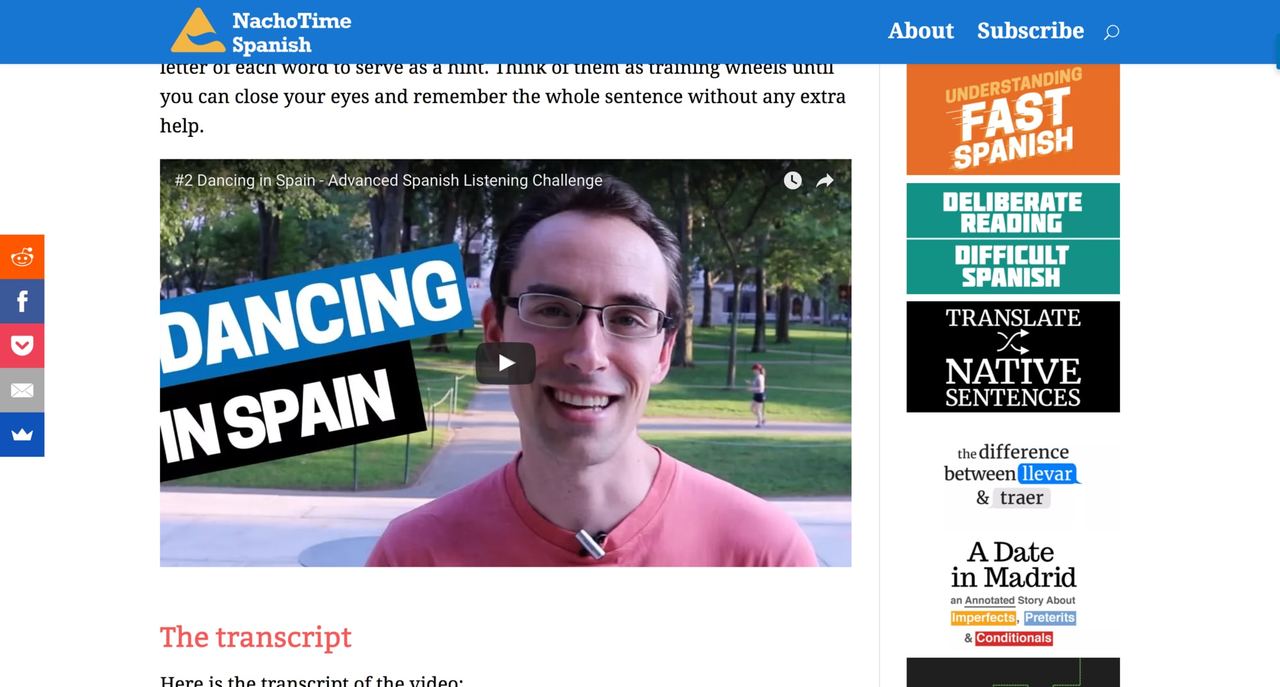 It's Nacho Time is a blog aimed at intermediate students looking to break through their plateau. This article about indirect/direct object pronouns covers one of the things that most people learn in school but continually fail to learn in everyday practice.

Why it stood out: Nacho has started a very new YouTube channel for illustrating key points in his blog and providing students with listening exercises. For example, his "Advanced Listening Challenge" series is aimed at upper-intermediate students and pushing them to understand the Spanish language better. Transcripts are provided at the end of each video, in addition to tricks on mastering specific parts of the Spanish language.

One thing that I find particularly difficult in a conversation is the ability to tell a story. Even for near-fluent speakers, storytelling ability seems to be difficult. One of the highlights of It's Nacho Time is the series on how to tell a story. From covering the past, to reporting on upcoming events, Nacho shows a number of invaluable ideas on learning to master the elusive skill. 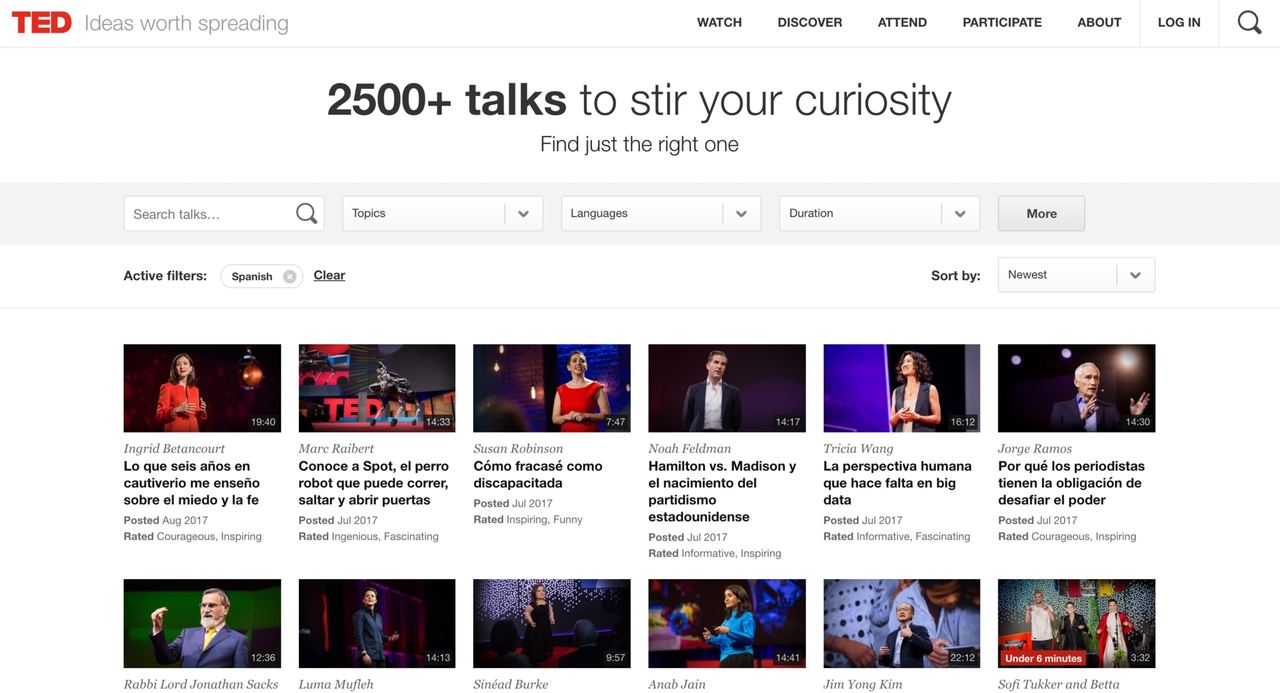 Not quite a blog, but a vlog of sorts, nonetheless.

Rather, for the first time, there is an entire Spanish-only session with dedicated Spanish speakers for a Spanish audience. From their website:

TED en Español aims to be "a sweeping initiative from TED designed to build content and community in the Spanish-speaking world."

I think TED has it all, from quality content that enriches your life with new perspective, to professional-grade transcriptions and dubbing, to a very clear presentation-quality Spanish that is rarely found elsewhere. For learning business Spanish and imitating a clear accent, I find repeating the speaker very effective. For practicing conversational Spanish and learning slang for more informal settings, however, I would look elsewhere.

Just like it's important to have a healthy and balanced diet, choosing the right Spanish blogs to read involve introspection. Do you prefer written content over visual content? Or would you rather listen to a podcast?

Finally, it matters where you are in the Spanish journey. The right blog for a beginner may be too basic for someone only looking to clean up their accent, while an "Advanced Listening Challenge" may be too overwhelming for beginners.