As harvest season and an autumnal change in the air fast approaches, so too does the Chinese Mid-Autumn Festival.

From the explosive fireworks and firecrackers of Chinese New Year and the sticky rice dumplings （粽子 Zòngzi） of the Dragon Boat Festival to the delectable mooncake of the Mid-Autumn Festival, Chinese festivals are one the liveliest and most jubilant parts of Chinese culture.

Chinese festivals not only make for great parties to raise your spirits but are also fantastic opportunities to make your Mandarin Chinese more fluent.

Wherever you are in the world, be it China, Singapore, Malaysia, Taiwan or somewhere further afield in North or South America, Africa or Europe - with so many Chinatowns and Chinese districts and communities across the globe, the celebratory atmosphere of the Chinese Mid-Autumn Festival will probably not be far off.

Each Chinese festival is closely intertwined with China's rich cultural history, offering festival goers and observers (and most importantly, Mandarin learners!) a unique insight into Chinese folklore and cultural traditions.

Just as this guide will show you, Mid-Autumn Festival is closely linked to the moon.

As many people know, it is a lunar festival that occurs during a full moon in mid-autumn. This Chinese festival also sometimes go by the name of Harvest Moon Festival, which is why so many aspects of the festival - the mooncake, moon lanterns, Moon Goddess mythology and tales and late night moon gazing - are connected to the moon.

Read on to wise up on all you need to know about using your Mandarin Chinese during the Mid-Autumn Festival 2018... 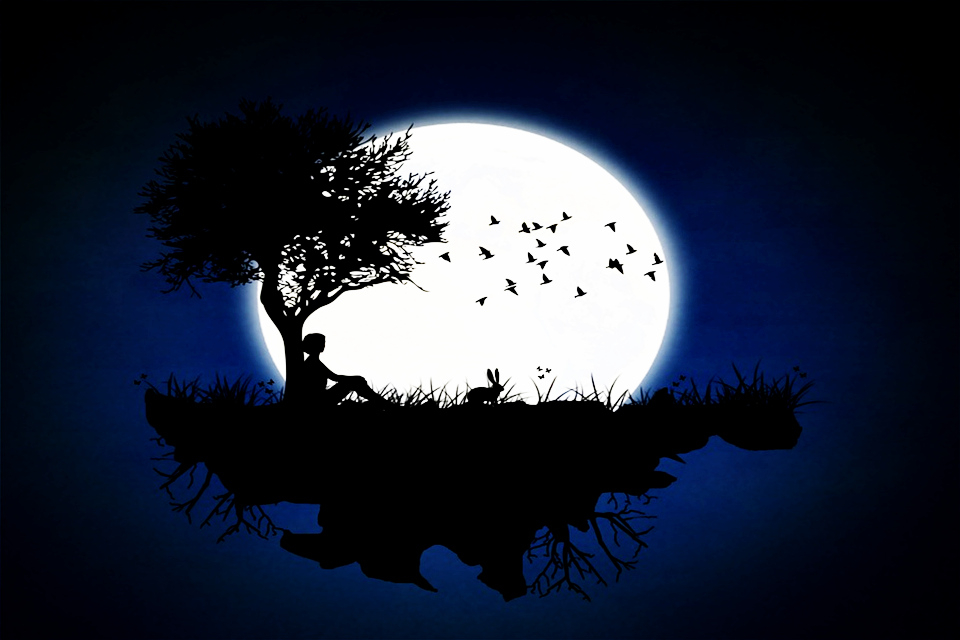 Myths and legends surrounding the Moon Goddess make Mid-Autumn Festival what it is today!

Myths and Legends of the Moon Goddess

So just where did all this moon mania begin?

As is true of most folklore, myths and legends pertaining to the Moon Goddess and the root of Mid-Autumn Festival form part of China's oral history. Traditional Chinese tales of the Moon Goddess were often passed down from one generation to another by being recounted as stories. This has resulted in several different versions of the Mid-Autumn Festival myths and legends coming into existence.

Some say that in ancient China, Mid-Autumn Festival came about as the emperor was required to make sacrificial offerings to the sun during springtime and to the moon during the autumnal months.

The full moon of mid-autumn was chosen as a day of sacrificial offering to ensure a bountiful harvest.

Yet, most of the myths and legends connected to the founding of the Mid-Autumn Festival link to The Moon Goddess, Chang'e and her husband, Houyi.

Legend has it that the ten sons of the Jade Emperor of the heavens were causing trouble, acting as ten blazing suns scorching the Earth. These burning suns were drying out the land and causing much suffering to the mortals living there who were now forced to endure a blistering heat.

Knowing what a skilled archer Houyi was, the Jade Emperor called upon him to teach his sons a lesson.

Houyi soon bore witness to the devastation and destruction that the blistering heat had caused on Earth. He quickly shot down nine of the suns and in doing so, mortally wounded nine of the Jade Emperor's sons.

On hearing the news of his sons' deaths, the enraged Emperor banished Houyi and his wife, Chang'e to a life of mortality on Earth.

However, the Queen Mother of the West lived on Earth and she had heard of Houyi's heroism and bestowed the Elixir of life upon him as an act of gratitude.

Houyi, hoping to eventually share half of the Elixir with his wife, hid it away in a box for safe keeping and warned Chang'e not to drink it.

However, one day when Houyi was not at home, Chang'e, overcome by curiosity, drunk the entire Elixir. The power of the Elixir was so strong that she was immediately compelled to fly towards the heavens and lead a life of immortality and solitude far from her beloved and now mortal husband.

According to legend, in order to remain as close as possible to Houyi, Chang'e flew to the closest moon to Earth where she resided with the Jade Rabbit.

From then on, each year during the full moon of mid-autumn, the heartbroken Houyi would lay out offerings to his Moon Goddess and slowly but surely, others began to do the same.

Try using some of this Mandarin vocabulary next time you want to discuss tales of the Moon Goddess and Mid-Autumn Festival with your mates! 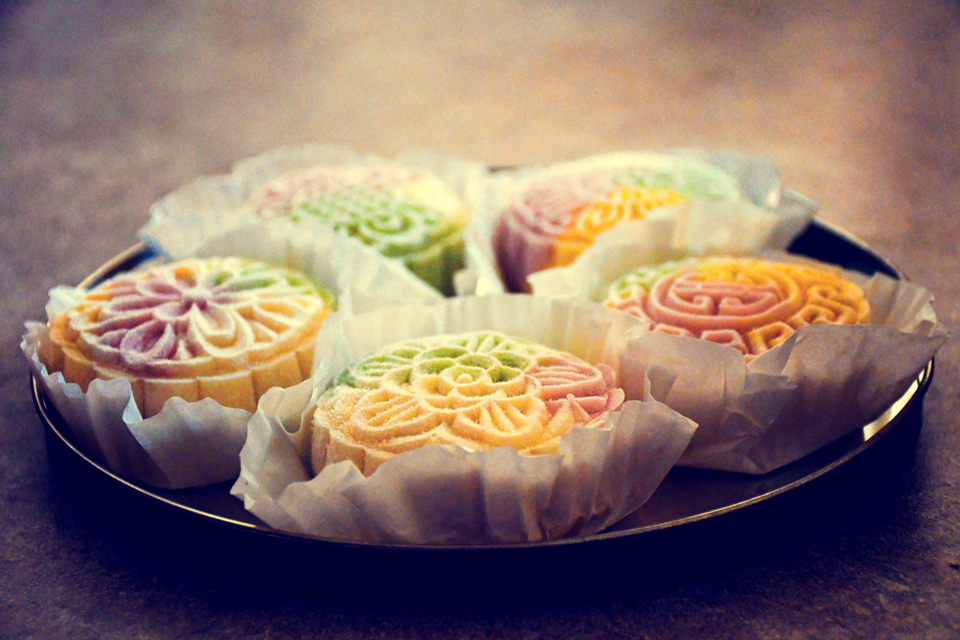 Anyone for a spot of mooncake?

Depending on how long you have been learning Mandarin Chinese, you may or may not have already heard of mooncake.

Mooncake is the pastry dish traditionally eaten as part of the autumn lunar festival celebrations.

Mooncakes can come in all colours, shapes and sizes and with a variety of fillings including red bean, dates and even lotus!

Giving the gift of mooncake in celebration of Mid-Autumn Festival is a common pastime among family and friends during the autumnal season.

Making different kind of mooncakes has also become somewhat of a creative art form in recent years. Bakeries now churn out anything from giant mooncakes to multicoloured mooncakes with elabourate designs and luxury fillings!

Mooncake is a bit of a Marmite delicacy in China - some love it, some hate it. Visit your local Chinese bakery this September to let your taste buds try out this very unique lunar delight!

Your Mandarin won't get you very far during this Chinese festival if you don't know how to say mooncake! 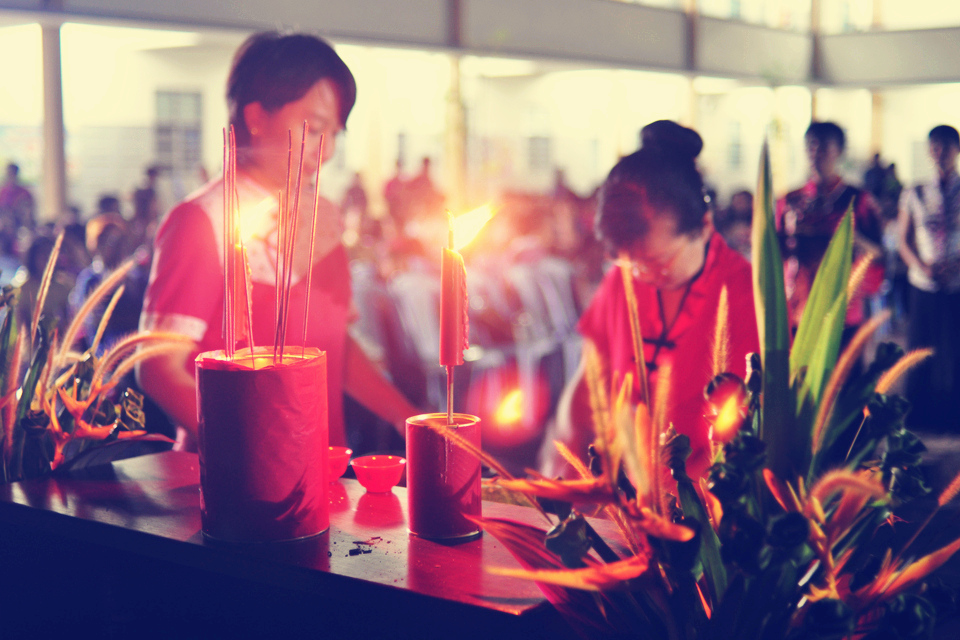 Praise and worship is an extremely important of Mid-Autumn Festival.

As the day draws to a close and the moonlight begins to shimmer, people begin their praise and worship to the moon and the Moon Goddess.

A shrine to the Moon Goddess, including fruit, such as pomegranates and dates as well as incense sticks, candles and artistic Chinese paper-cuttings all in the auspicious red colour are often placed outside one's home. 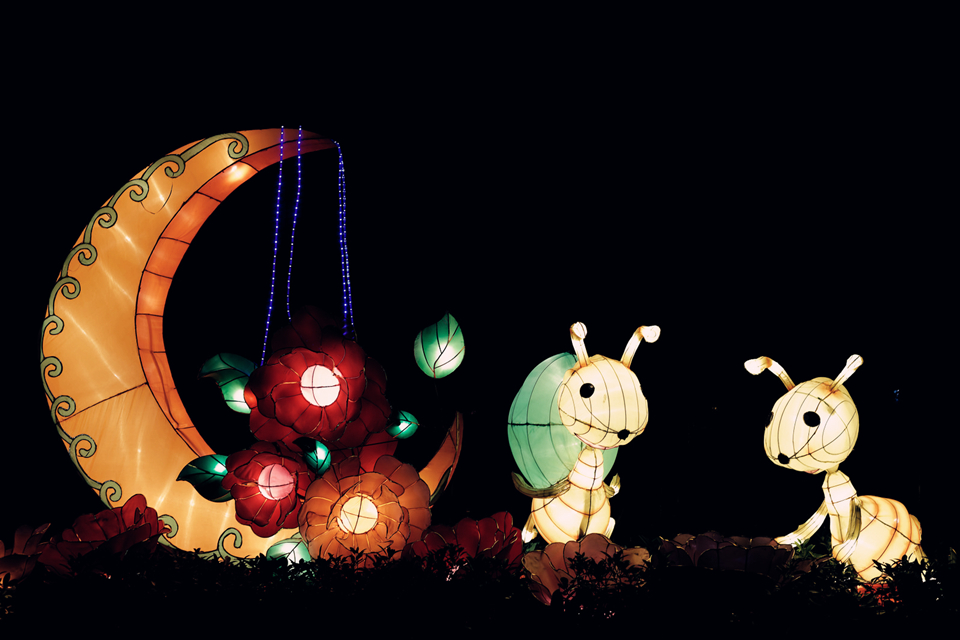 Lunar festival lanterns at the ready and we are all set!

The lunar festival is one of the largest and most important of all Chinese festivals. Marking it as an emblem of Chinese culture, it has been made a national holiday in China where celebratory events and parties take place nationwide.

As with most Chinese festivals, Mid-Autumn Festival is also a time of family reunion.

Traditional Chinese custom dictates that once offerings of fruit and mooncake with lit incense sticks have been made to the Moon Goddess and all prayers have been made, families should sit down together to eat the offerings and a hearty meal.

Just as flavours of mooncake differ from region to region, so to do different customs in relation to the food that is eaten during the Mid-Autumn Festival.

However, most reunion meals will include dates, pomegranates, almonds, mooncakes, crab, pumpkin, chestnuts and taro.

Legend has it that on the moon where the Moon Goddess resided with the Moon Rabbit (the Jade Rabbit) there was also a Cassia Tree. Today, many people drink Cassia wine on the eve of the festival to accompany their evening meal.

Apart from a reunion meal, it is also part of Chinese custom to place outdoor lanterns outside one's home during the festival.

These can be moon or Moon Goddess shaped stand alone outdoor lanterns or take on virtually any colour or form - anything from red lanterns, floating water lanterns and hanging lanterns to sky lanterns.

Traditionally outdoor lanterns were homemade, but today many people purchase them from local shops who usually offer an array of different lanterns. 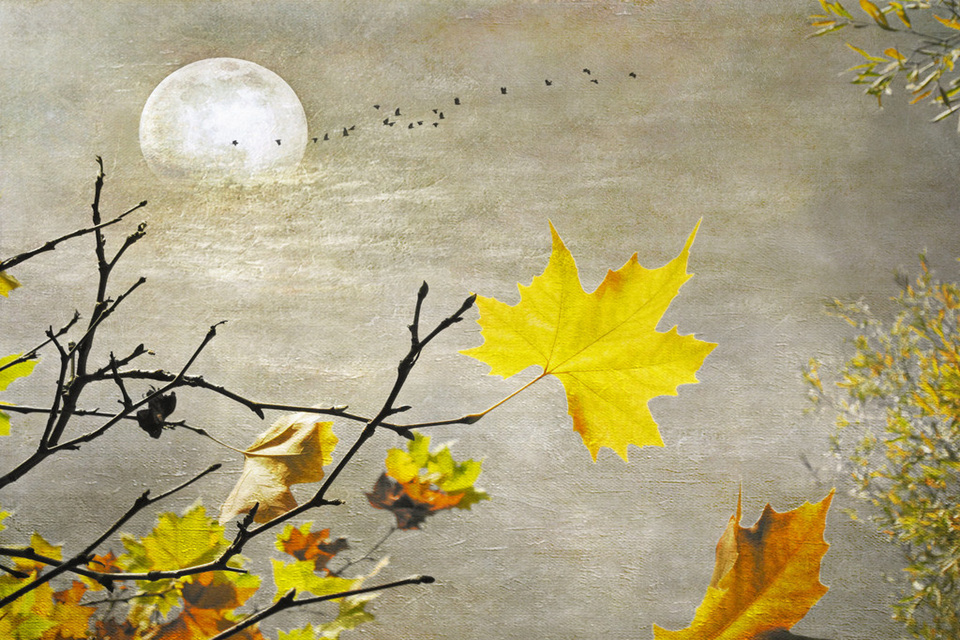 Diaries at the ready! Mid-Autumn Festival 2018 is going to go out with a bang!

So, the question on everybody's lips is just when exactly is Mid-Autumn Festival 2018?

Mid-Autumn Festival is celebrated on the fifteenth day of the eighth month of the lunar calender, which falls on the 24th September 2018 according to the solar caldender we use here in Europe.

The fifteenth day of the eigth lunar month is also the autumnal equinox. The full moon - or so termed harvest moon - that occurs during the lunar festival is said to provide enough moonlight to enable farm workers in the fields to continue harvesting until late into the evening, which is perhaps how the festival truly came to be.

How to Say Mid-Autumn Festival in Chinese

Because of the importance of this Chinese festival, there are actually many different of ways of saying Mid-Autumn Festival in Chinese.

The most common of which is as follows:

When learning Mandarin this autumn, don't forget to wish you friends and acquaintances a happy Mid-Autumn Festival!

Just as in English, there are different ways of naming this Chinese festival in Mandarin (Mid-Autumn Festival, Harvest Moon Festival, Mooncake Festival, Lunar Festival, etc.), here are just a few you may want to listen out for!

If you are hot on Chinese culture and want to find more ways to improve your Mandarin then you could try learning about Chinese movies and Chinese literature. If you want to speak what are convered in this article or anything that you are interested in speaking better, you can use Speechling freestyle model (say anything mode) that you can find inside "Speechling Conversation" in "Skill tree" of the Speechling website or mobile app .