Art is one of the most popular tourist attractions in France in the twenty-first century. People from all over the world visit France to appreciate its museums and art galleries and its spectacular medieval architecture, famous Renaissance châteaux, and overall artistic and cultural history.

What better way to learn French than through French art and artists, right? Paris is known for being the city of love, but also for being the world capital of art. The city contains several pieces of contemporary European art, especially from the Romantic era. By learning about French artists, you can understand some cultural tidbits and master the difficult French pronunciation at the same time! 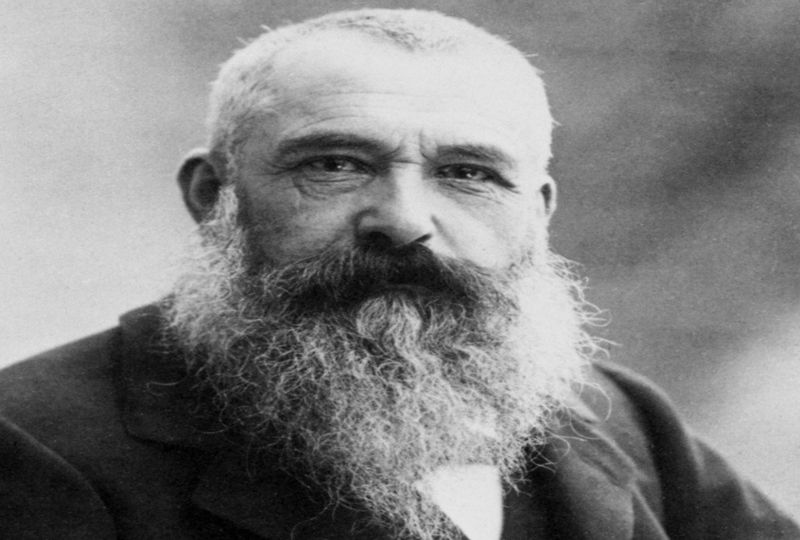 While our list below mentions the best French Artists ever existed, you can also branch out to learn more about French. Art is not limited to paintings and sculptures only. One of the best ways to learn French and its slangs is to discuss art with other French people.

Do not be afraid to spark a conversation with the person standing next to you when you are at the museum. Art is a means of communication, so discuss the meaning or your interpretation of the art piece. There is no right or wrong! Also, French people will enjoy your interest in their culture.

When you think about visiting art in Paris, the name Claude Monet may come to your mind. He is primarily known for being the father of impressionism and as the main force behind the artistic revolution.

As a result of all his arts and contributions, he is regarded as the most well-known French painter. The water lilies he painted are famous and taught in elementary schools all around the world.

Monet was obsessed with discovering new ways to express himself as a painter. He defied convention by thinking in terms of colors, light, and shapes. Claude Monet was recognized as a light master as he could paint the same subject again and over again while generating a completely distinct work of art.

Furthermore, he was the impressionist most dedicated to the movement. The name ‘impressionism’ itself is derived from his Impressionism Sunrise painting, which is widely regarded to be the most amazing and famous french painting to be created.

Among all the different artists who made history, he is widely regarded as one of the greatest impressionist painters, and his work has served as the standard for others. 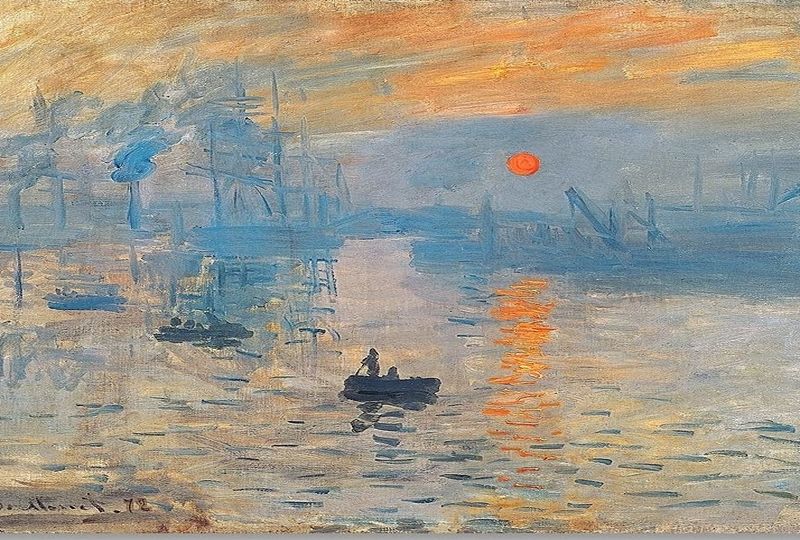 Sunrise depicts the port of Le Havre at sunrise, the two small rowboats in the foreground and the red Sun being the focal elements.

With its dynamic brushstrokes, this work is credited with launching the Impressionist style when it was first displayed in Paris in April 1874. It signifies a shift away from the traditional painting that came before it, allowing the painting to take on a new level. 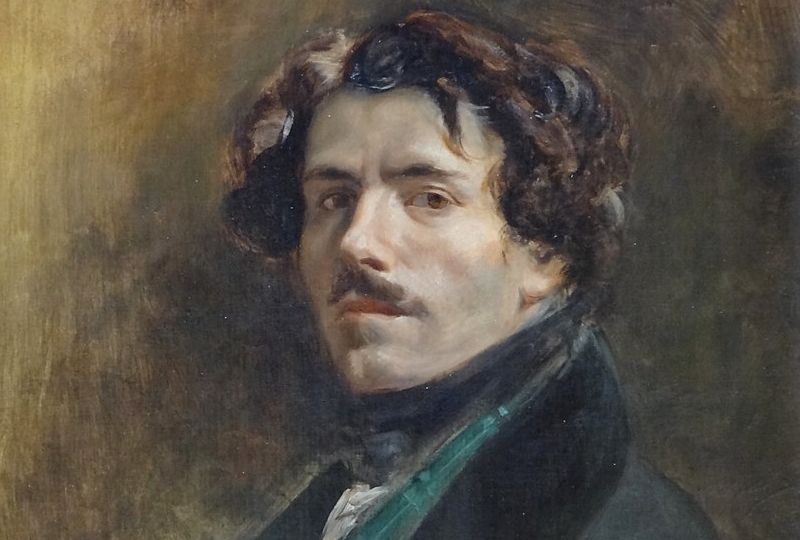 Particularly known for painting and lithography, Eugene Delacroix was the most important artist of the 19th-century French Romantic era and is often considered the greatest French painter of his time.

Dante and Virgil in Hell, his first major work, marks the transition from Neoclassicism to Romanticism in the narrative painting genre in France. Delacroix was influenced by William Shakespeare's works as well as Romantic authors such as Lord Byron.

Impressionism was heavily influenced by his expressive brushstrokes and vivid use of color. Eugene Delacroix's paintings inspired a generation of Impressionists, including Pierre-Auguste Renoir, Edgar Degas, and Edouard Manet.

His famous work includes Liberty Leading the People (1830) along with The Death of Sardanapalus (1827) and The Massacre at Chios (1824).

His Masterpiece - Liberty leading the people 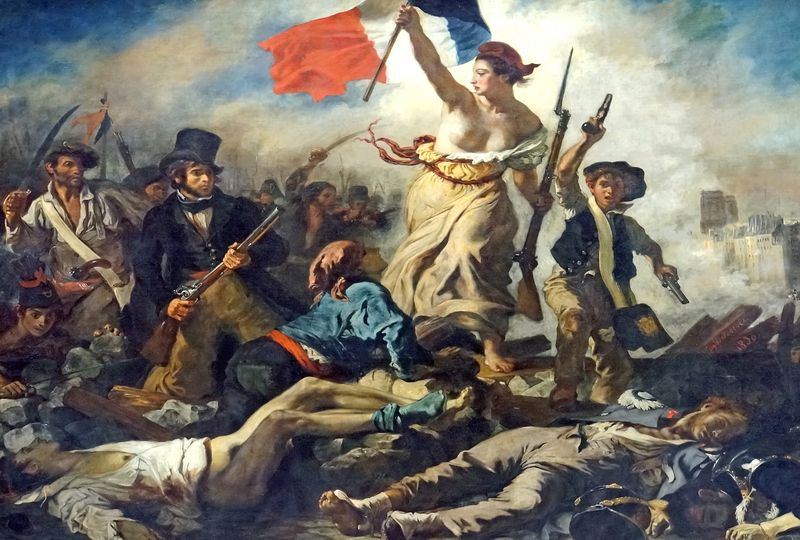 Delacroix at the Louvre is the one art exhibition in Paris that you should see. The work of art depicts Parisians being led over barricades and the bodies of the fallen by the powerful Goddess of Liberty, who triumphantly holds up the French flag.

It's an excellent example of how Delacroix drew inspiration from gloomy historical events like the Revolution, revealing a love of tragedy and turmoil. It is a well-known piece in the history of French art. 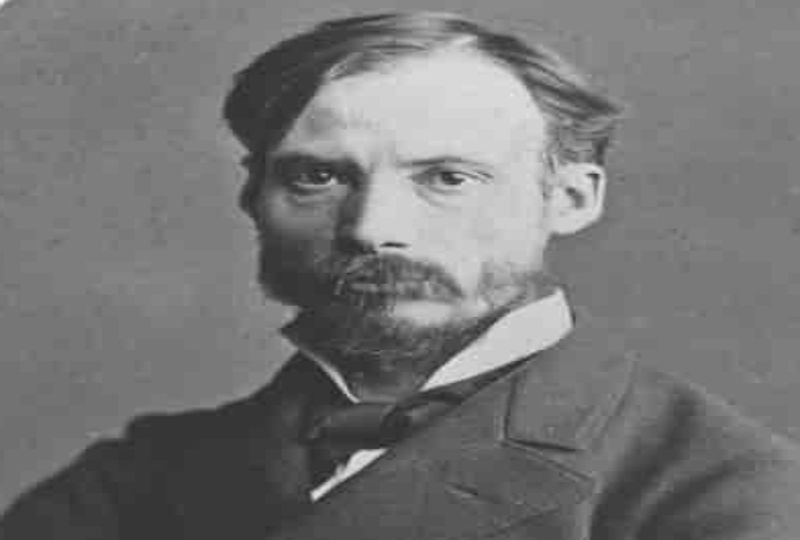 Pierre-Auguste Renoir was a prolific artist and one of the most significant Impressionists. Later, he distanced himself from the movement and turned to traditional art for inspiration.

Pierre-Auguste Renoir is famous for his ability at painting women. In addition to his nude and dance subjects, he enjoyed capturing the changing face of Parisian society.

Bal du Moulin de la Galette is one of Impressionism's most well-known works, and has been dubbed "the most beautiful painting of the nineteenth century."

In the end, we can undoubtedly say that his distinct and forceful style has established him as one of the most well-known artists of his time. 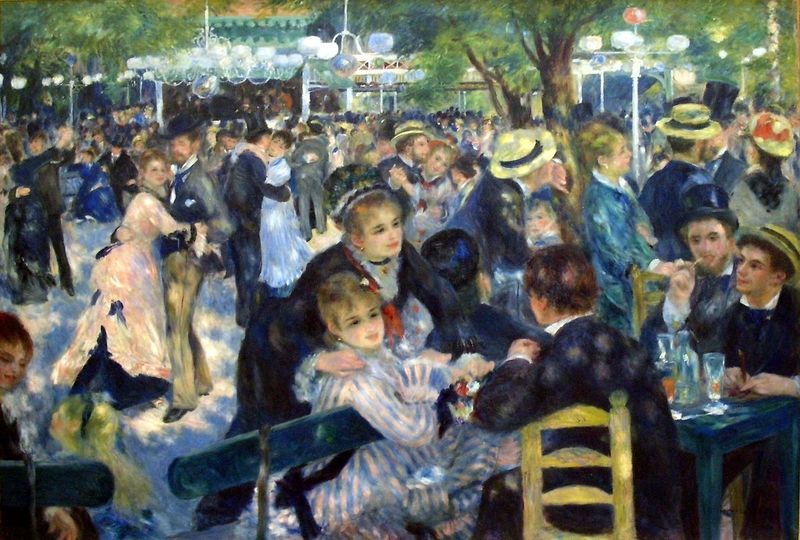 The picture depicts a typical Sunday afternoon in Paris's Montmartre area at the old Moulin de la Galette in the district of Montmartre in Paris. 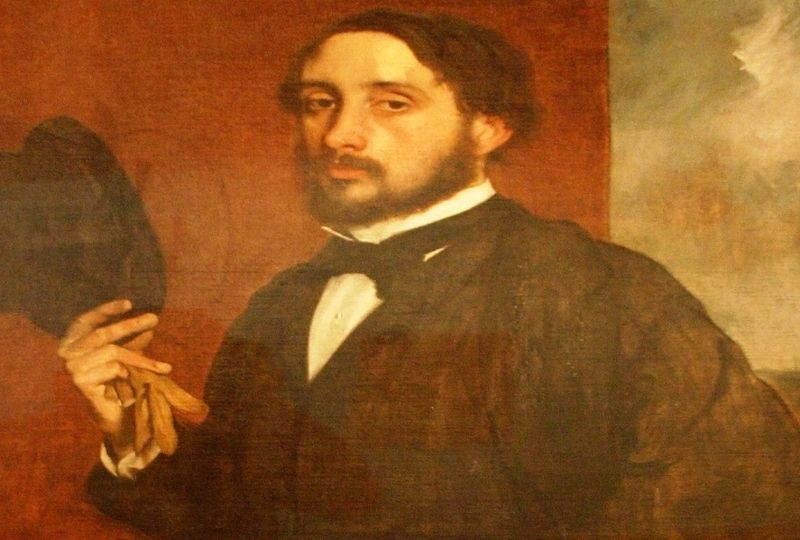 Edgar Degas was a French painter who lived from 1834 to 1917. He is regarded as one of the Impressionist's forefathers in France. In his later years, he distanced himself from the movement, which he was extensively linked with in the beginning.

From the beginning of his artistic career, he was interested in dance. A substantial portion of his work consists of images of ballerinas, for which he is well known.

His ballet series includes some of the most well-known impressionist works ever created. Degas, like no other artist of the time, was able to capture movement like no other, which is why he is regarded as one of the finest French painters of all time.

He was a well-known sculptor, with his best-known work titled Little Dancer Aged Fourteen, in addition to his masterpiece The Absinthe Drinker (1881). Note, absinthe is a green alcoholic drink that is now illegal in most countries.

One of the reasons for the legendary prominence of his dance paintings is that he captured movement like no other. 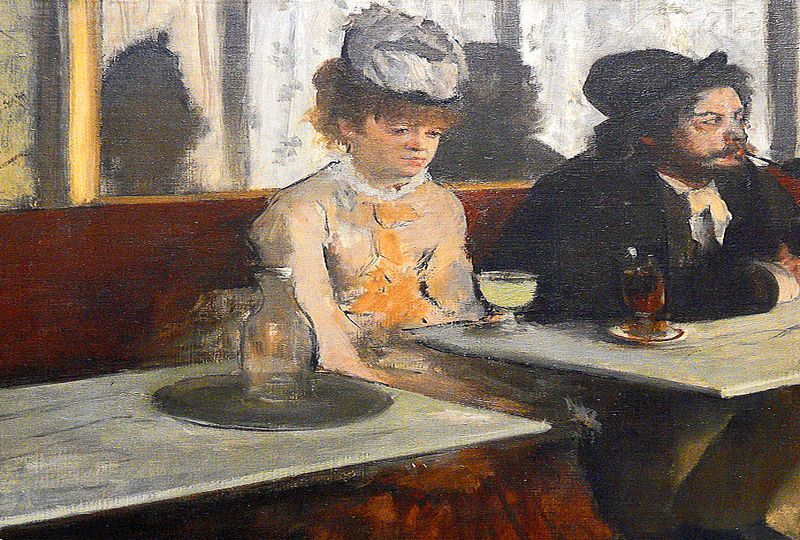 The work portrays a woman and man sitting side-by-side, drinking a glass of absinthe. They appear lethargic and lonely. 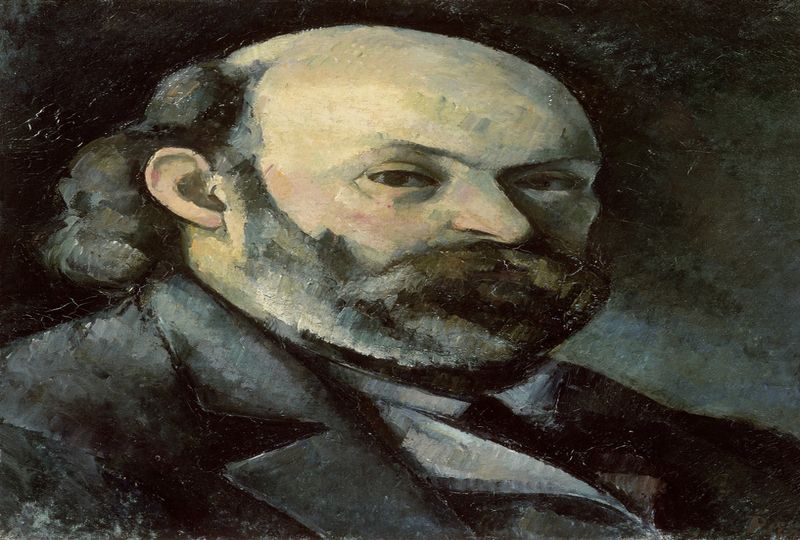 Paul Cézanne, one of the most well-known artists from the post-impressionist era. His art served as a bridge between the 18th-century impressionist movement and the dominating style of the twentieth century.

Paul Cézanne had a unique style and was known for creating spectacular paintings with his palette knife throughout his career. This was the time when modern expressionism first emerged.

Additionally, his desire to capture the truth of perception made him explore optical phenomena to provide the viewer with an aesthetic experience of depth.

Cézanne’s exploration of geometric simplification and optical phenomena inspired 20th Century artists to experiment with simplifications and complex multiple views leading to the birth of Cubism.

Picasso and Matisse are said to have remarked that Cezanne “is the father of us all.” In this way, everyone may agree that Paul Cézanne made an indelible mark on art. 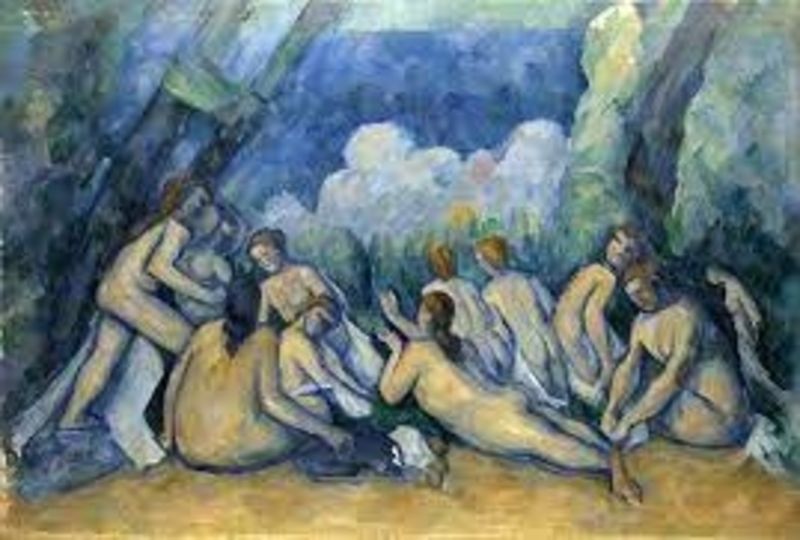 This breathtaking painting is known to be Cézanne’s greatest art.

Cézanne's scene, with its tranquil lake and church tower, is not an exact representation of a real village. Cézanne drew inspiration from nature and used his creativity to create this painting. 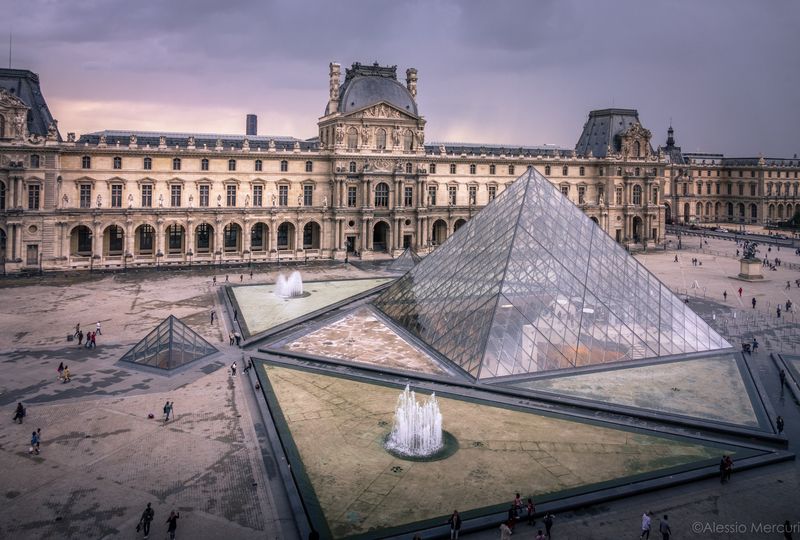 So... What's The Best Museum To Visit In Paris?

Louvre Museum is the world's largest and most famous art museum as well as a historic monument in Paris.

The building itself dates back to the 12th century when it was a fortress built under King Philip II. By the 16th century, King Francis I began construction and made it a royal palace. The palace was expanded over time until eventually the Revolution happened and it was converted to a museum in 1793

Approximately 38,000 objects from prehistory to the 21st century are exhibited over an area of 72,735 square meters (782,910 square feet). The collection of artwork can be found on four levels: lower ground, ground, first, and second.

What is interesting is that visiting the entire Louvre in one day is impossible as a person. Even one month spent exploring this area would be insufficient. If you spent 30 seconds on each piece of art in the Louvre, it would ultimately take you 100 days to see all the arts exposed. Those 100 days are without sleep, breaks, or mealtimes, that is. This can just show us how massive it is!

The Mona Lisa by Leonardo da Vinci, among the most renowned paintings is exhibited at the Louvre. This well-known work of art is responsible for a significant portion of the museum's daily visits.

The Louvre is older than many countries. It has been in existence since 1793. It's massive and exquisite, with more art than any other museum on the planet. It's even rumored to be haunted. Ghostly figures of a Roman soldier, a beautiful young muse, a painter, and a World War II German officer have been observed walking the halls by visitors and workers.

It goes without saying that seeing this famed fort-turned-museum is a must-do on any trip to Paris. Its fascinating past will enthrall you at every turn. 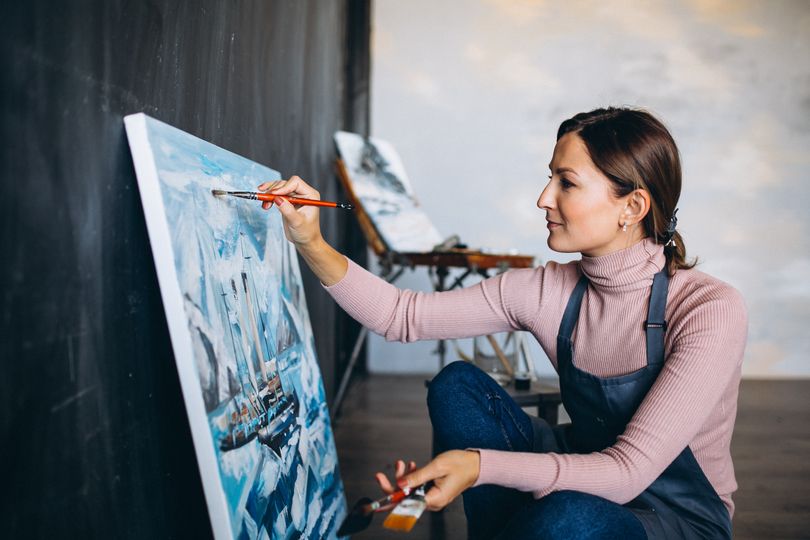 In the end we can undoubtedly say that throughout the centuries, french art and artists have played a significant part in defining the french culture and the whole world of art.

Its legacy may be traced back to 25000-year-old cave paintings, church paintings, and the great epoch in French art of the 19th and 20th centuries: the impressionists and post-impressionists.

By learning about french art, you are also learning the correct pronunciation of their title. You can enjoy the language without any big effort. All you need is a keen eye and a receptive mind to understand the different french art.

Also, another great way to learn French is through podcasts. By listening to a French conversation, you can easily pick up the correct pronunciation, grammar and intonation of the voice like a French native. Also, it's a great way to understand the point of view of French people on several important matters!