Learning the language is not wholly just memorizing tons of Vocabulary words via a Dictionary and trying your hand at a lot of grammatical exercises. It is also about understanding people, their culture and their habits. You can learn more about that Here. In order to communicate with the Russians freely and be able to understand everything they are talking about, you have to know at least some Proverbs and Idioms. They are really widespread in Russian, unlike in some other languages, where they are not used that much anymore because of new digital types of communication.

Try to Guess the Meaning. It Is Fun

When I was learning foreign languages it was always fun to try to guess what different proverbs might mean and then checking them with the teacher. In order to understand their meaning, you had to get into the natives boots and try to understand their logic. And by getting to know the proverbs you could get very interesting insights on how people had lived and developed. Let us try to do the same thing.There are hundreds of Proverbs in Russian Language so I made a list of the most popular ones and another list of their English analogues as an example to show you that it can be a lot of fun, learning the language through proverbs. Try to match them then self-check and after that you can read up some interesting information about their usage and origins.

a. When in Rome do as the Romans do.
b. You can’t make an omelet without breaking a few eggs.
c. Don't talk the talk if you can't walk the walk.
d. If at first you don't succeed, try, try again.
e. Good luck!
f. Good riddance
g. No pains, no gains.
h. A green wound is soon healed.
i. Don’t judge a book by its cover.
j. Slow and steady wins the race.
k. It is hard to start but once you do, you are unstoppable.
l. Loose tongue
m. Like father like son
Now that you have matched the proverbs, read some interesting facts about them and see if you have guessed correctly.

This idiom is awfully popular in Russia. We say it all the time, especially to someone who is going on an important examination or meeting. Let’s translate it word for word. The translation is a dialogue between two people:

-Get neither fur, nor feather!
-To the devil!

As strange as it sounds, the idiom is quite logical. Russians are very superstitious and hunters used to wish each other not to catch anything in order not to jinx good luck. Make sure to write down the words and remember the idiom itself. This one is important! 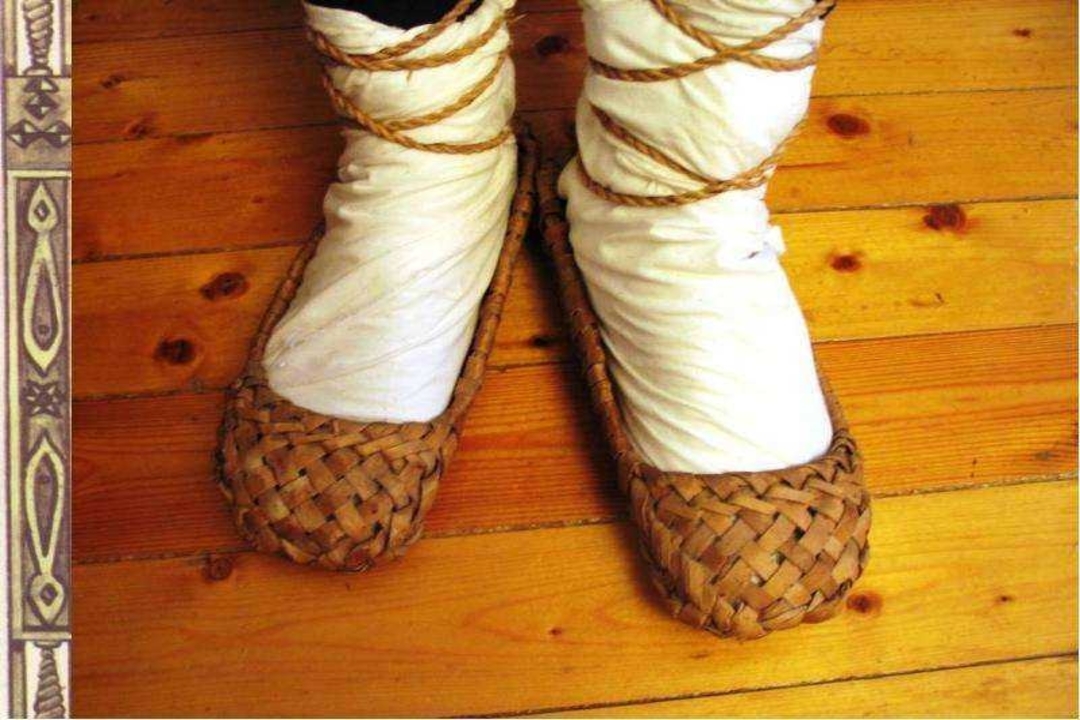 Russian traditional boots made of bast

This is a hard one to understand too but really characteristic to Russian culture. The translation is: Not woven with bast. You see, лыко is translated as bast, a material used to make wicker baskets as well as peasants’ Bast Shoes a long time ago. So, a person who wore boots of a different material was richer. As time went by, people began to associate it with other qualities, such as wisdom and cunning which are not seen right away. 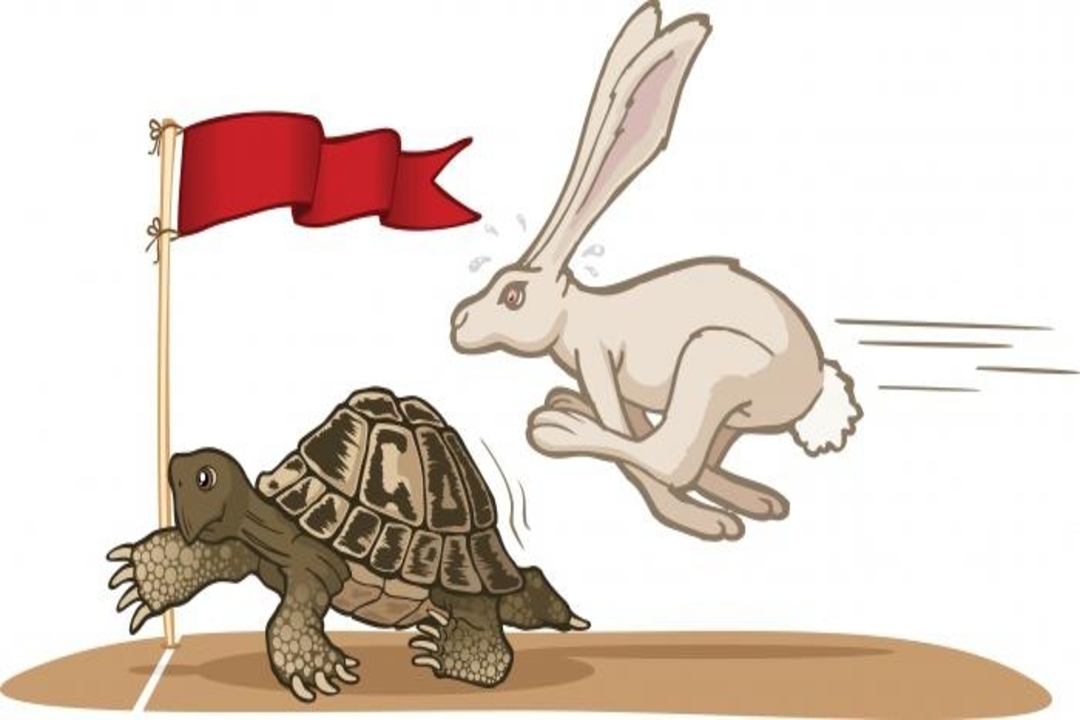 The old story about turtle and hare having a race

This is one of the simplest actually. It is translated: If you go slow, you can get farther. I think that a proverb like that exists in almost every language. The meaning is as everywhere. If you hurry, you make mistakes. Remember the story about the turtle and the hare? That is what the proverb is about. 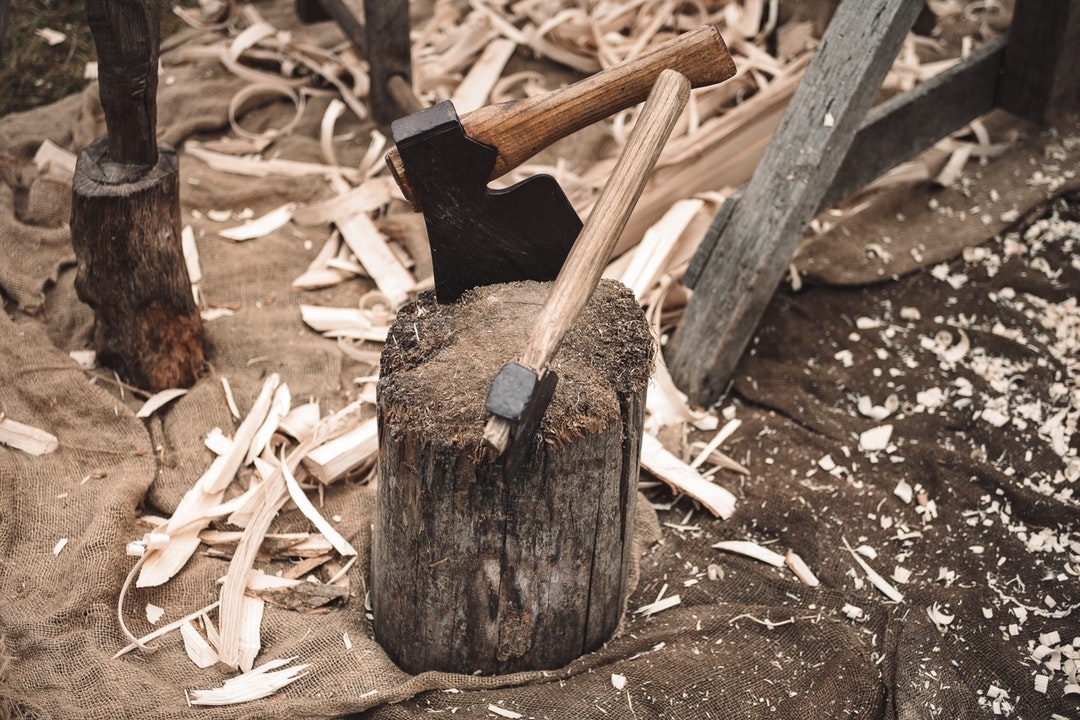 An Axe and its chips

Russian variation literally means: When you chop trees in the forest, chips fly. The notion is popular everywhere, stating that your actions influence others around you and it is worth thinking about it. 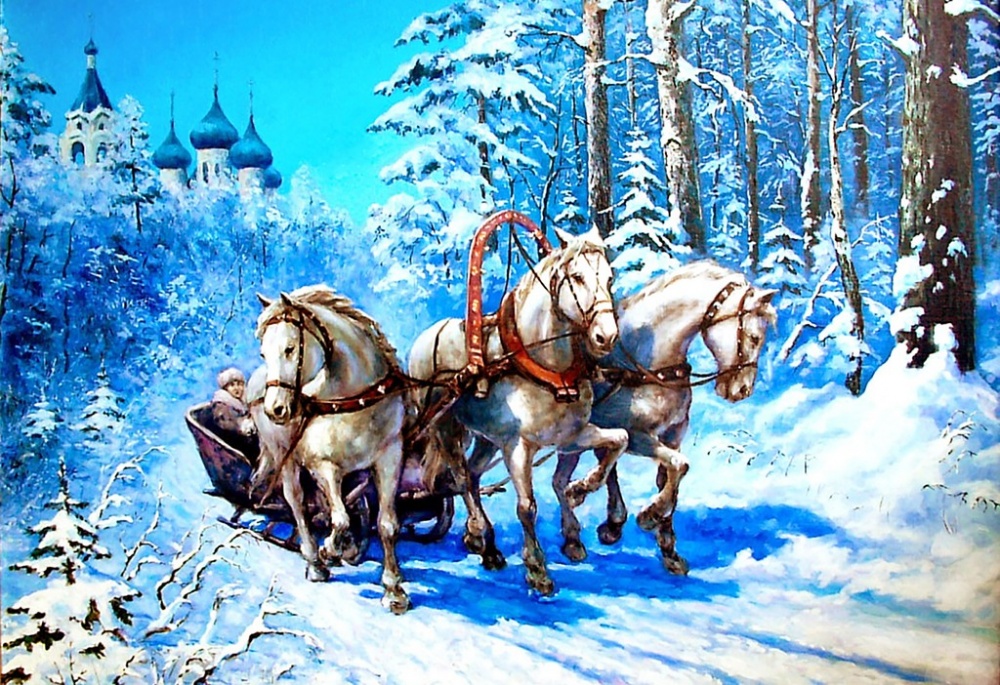 This is one of the proverbs that don’t really have an English analogue as far as I know. Maybe you do! If that is so, please tell me, I’ll be glad to learn it. So, the translation is as follows: Russian man harnesses horses slowly but rides fast. The proverb may seem strange to you but it really characterizes Russians a lot. The first meaning of the phrase was about carriages. Most countries used two steeds to pull the carriage but Russians used three, which was faster but took more time to get them all harnessed. As years went by this phrase became the proverb that most characterizes my people. Being in a cold country with dire climate, people got used to a lot of hardships, following the serfdom law, when most peasants got basically enslaved. All of that made us a very patient nation but as another proverb states: Still waters run deep (Look up a Russian Аnalogue and translate it). If you get the people agitated enough to move, they are unstoppable. 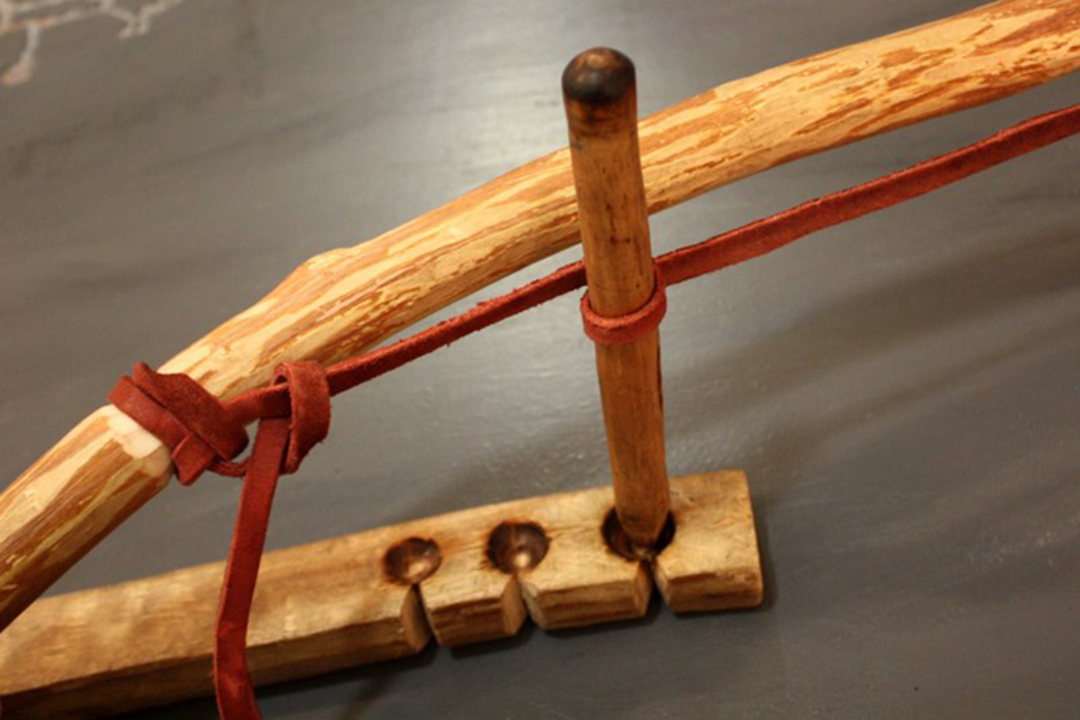 Device for igniting fire without matches

This proverb is quite easy to understand and the meaning of working a lot patiently to get results is really widespread but I decided to add it because of an interesting word play. The translation states: “Patience and Hard work will persevere”. There is a really Great Article about word derivation and last word is what really contributes to the meaning. You see, the basic word “тереть” means to rub but adding an adjunct пере- we get перетереть which means to rub through or to persevere. A good reference here is making fire using sticks and friction. That really requires a lot of patience and rubbing.

Literally means It will heal before your wedding. This phrase is most often used with children who fell or got some scratches playing. The meaning is quite clear here stating that the wound will heal shortly and there is no use crying over it. 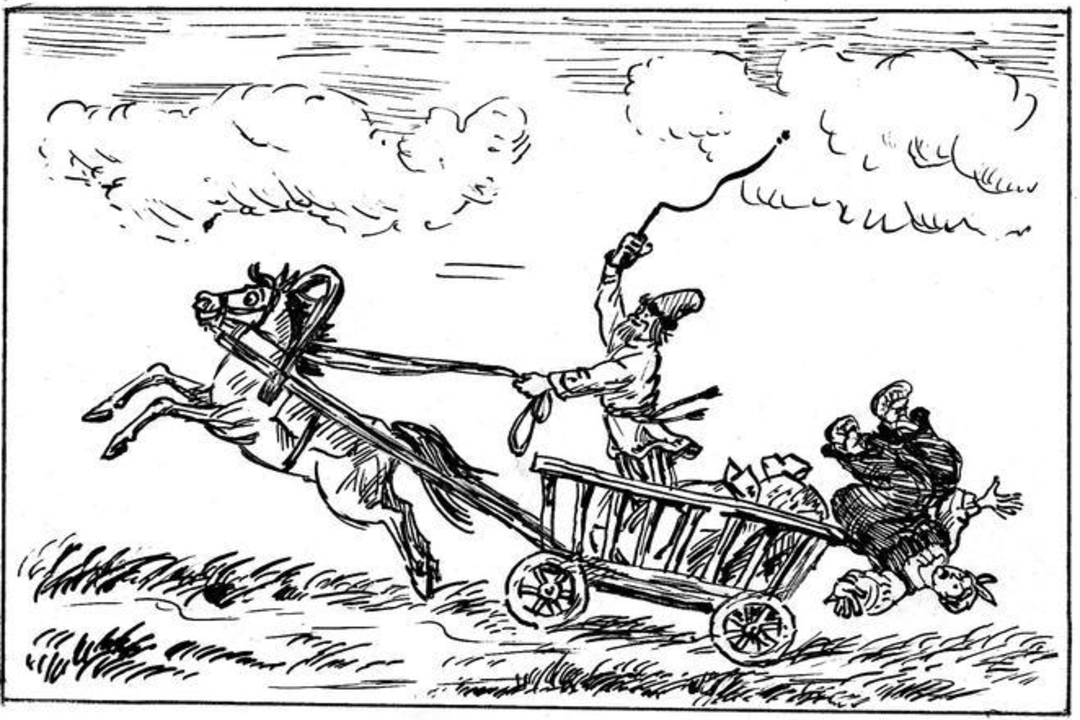 The proverb about the woman and the cart

This one is a very colloquial proverb. It is translated: The woman off the cart – easier for the horse. A very old proverb that is now used to tell a person that the lack of something or someone is for the better. Originally its meaning was connected to the fact that only one peasant – the husband was enough to ride a cart to carry things around and the second one only used up space and horsepower.

This is a good one and really hard to translate since it has a very unusual word which is really not a full word but an exclamation. Гоп is something people shouted in approval a long time ago, especially concerning jumps. Now you should be able to see the meaning clearly: Don't shout Gop before you have jumped over. Note that перепрыгнуть stands for jump over unlike прыгнуть, which stands for jump.

Bones are used to make us steady and rigid if needed. So, logically a tongue without bones is used towards a person who cannot hold his tongue. A person who likes to gossip a lot.

Almost every nation has a proverb that stresses the similarities between family members. We have it in an allegorical context. An apple doesn't fall far from the apple tree, we like to say when we mean that descendants and their parents are really alike. 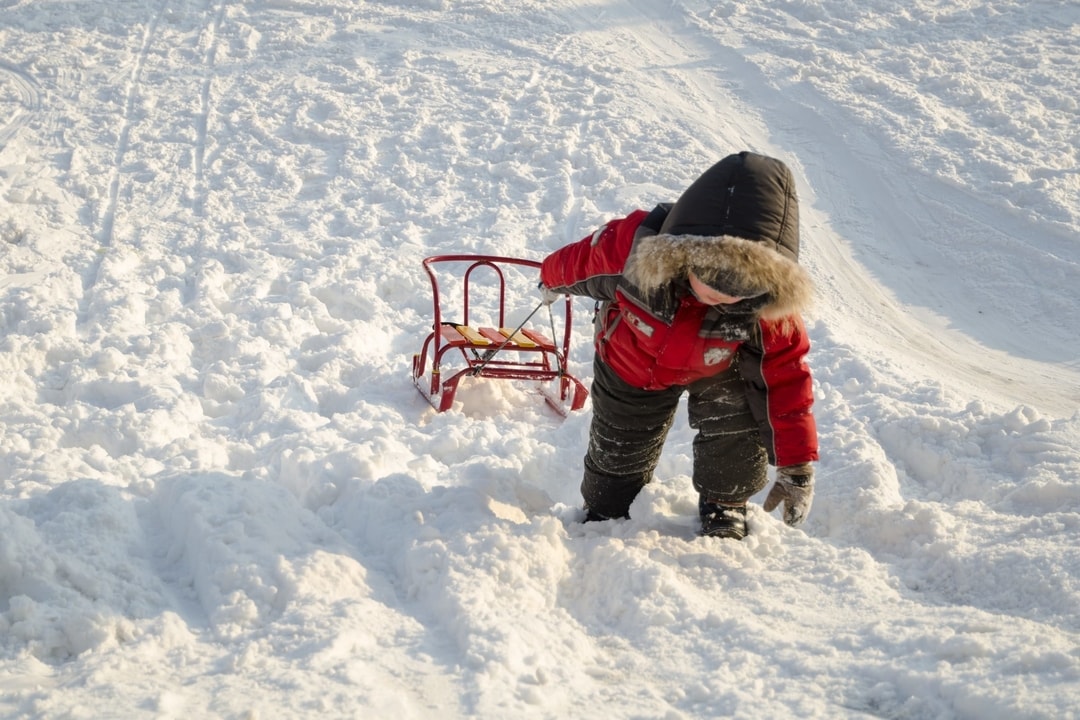 A very popular proverb in Russia that says: If you love to sled, you have to love carrying them back up. Since Russia is a northern country, there is a lot of snow during winter, so sledding is very popular. It is a fun sport where you can feel the speed while going downhill on a sled. However, after you get down, a long trip back up the snowy hill awaits for you. And you have to carry the sled with you and it's absolutely awful! That's why the saying is popular in the context that in order to achieve something, you have to put in a lot of effort. 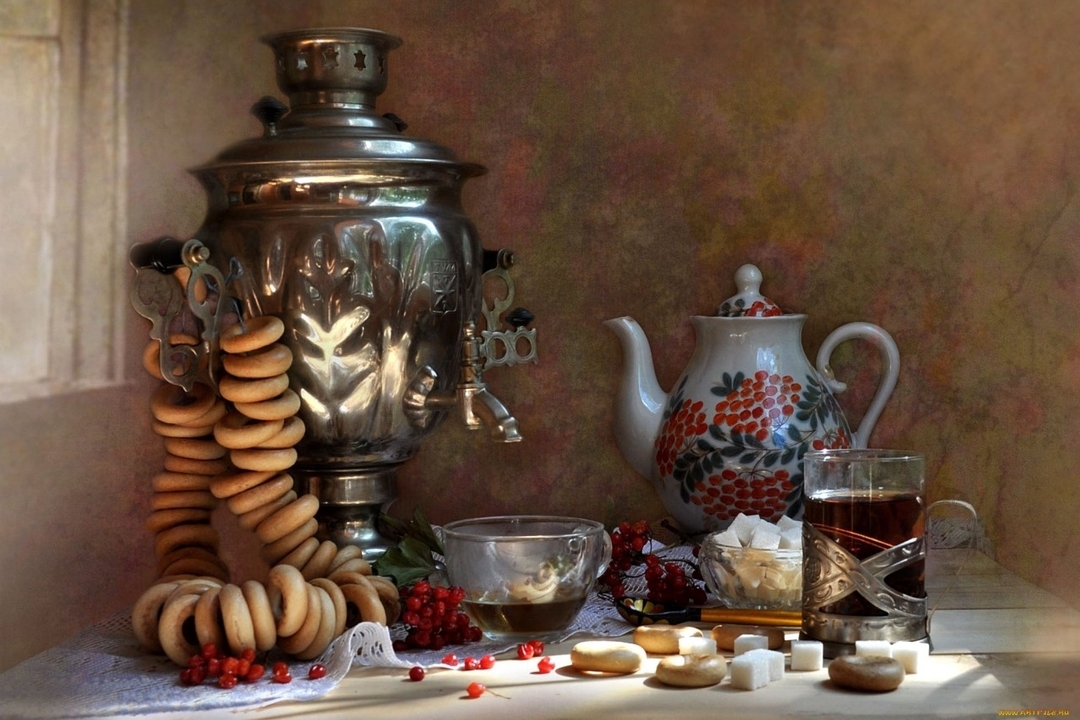 Have you ever heard of a Samovar? The thing is so Russian that it doesn't even have any translation at all. Well, that is a special type of pot to boil water using timber. It is really big and people used to boil water for a big family or for the guests and drink tea together.It can be said to be a boiler for a big company. And the proverb, translated as Don't go to another monastery with your own samovar, means that when you come to others' house or country, you have to follow their rules and not yours.

So, that is it. I hope that you liked the proverbs and got to know something new about Russians and our culture. If you ever get tired of exercises and learning words, try to change the way you learn the language. There are other fun ways. Using proverbs is only one of them. You can check out Russian Poems, for example. Learning the language should be interesting and fun for you. That is the only way to completely master it.