Today was the last day of my 90-day challenge to learn Spanish.

In early August, I was inspired by the story of how Speechling was started. A few guys made a bet to learn French in 90 days.

I thought it was a funny story and I wondered if I could do the same. I took it upon myself to learn as much Spanish as I could in 90 days.

In this article, I’m going to share my overall progress, share what I’ve learned and give you a few practical tips so you can learn Spanish.

You might recall that I am a big believer in setting goals. In the beginning, I set a goal for myself to reach a B2 level of Spanish according to the Common European Reference Framework. This meant that I had started at an A1 level.

Was it possible for a total beginner to get conversational?
Throughout the challenge, I would periodically test myself on the Cervantes Escuela International’s site.

I went from A1 to A2 late in the second month. I just missed on the B1 level at the start of the third month.
How did it end? Did I reach B2?

According to this online test, I did.

I took the test on November 4. Screenshots are shown below.

The A1 level I passed easily.

The A2 level was challenging. Up until now, I never passed it. I finally did. 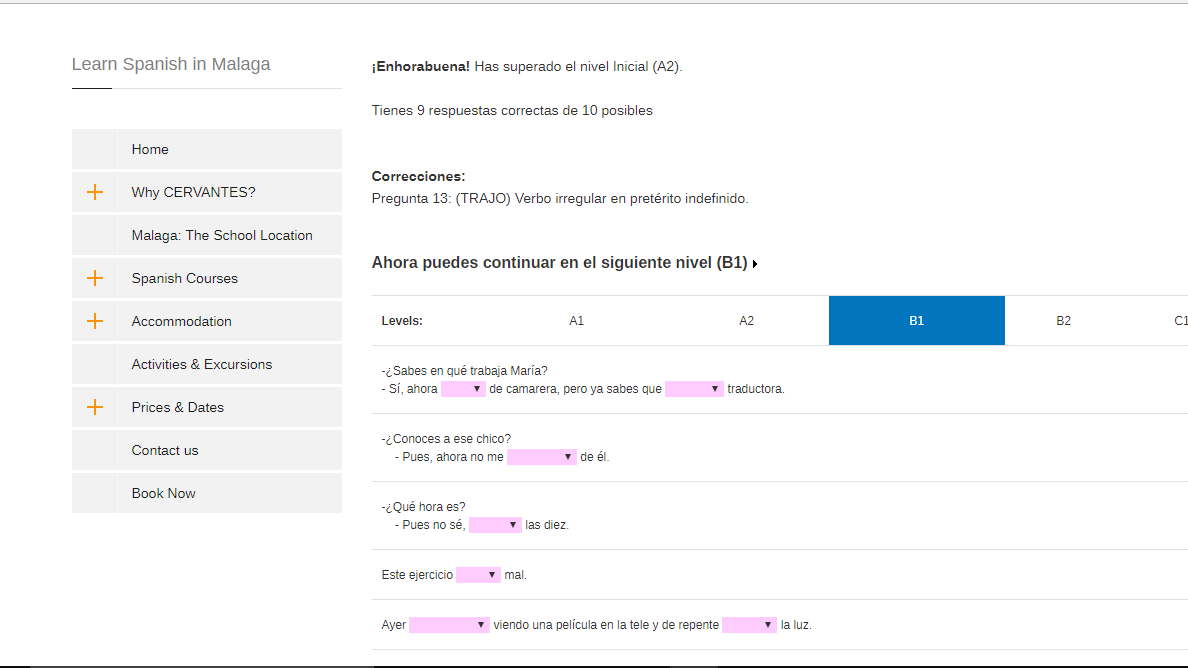 That meant I moved on to the B1 test. I saw this test for the first time so I had no idea what to expect. I answered 9 out of 12 correct. 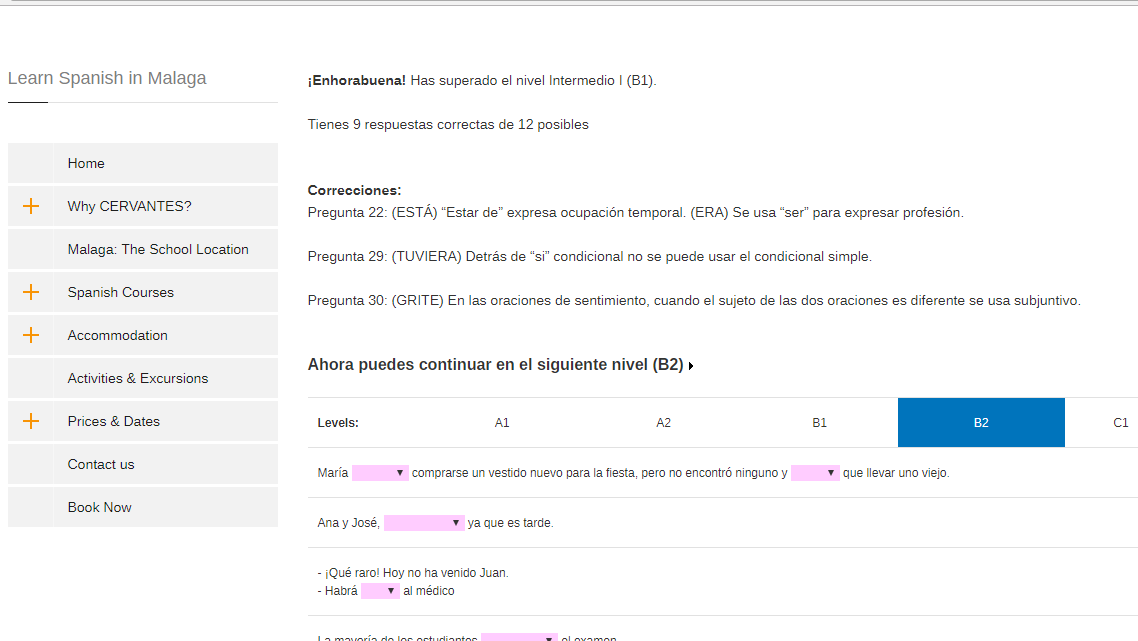 That meant that I’m at a B2 level. Mission accomplished!!!! 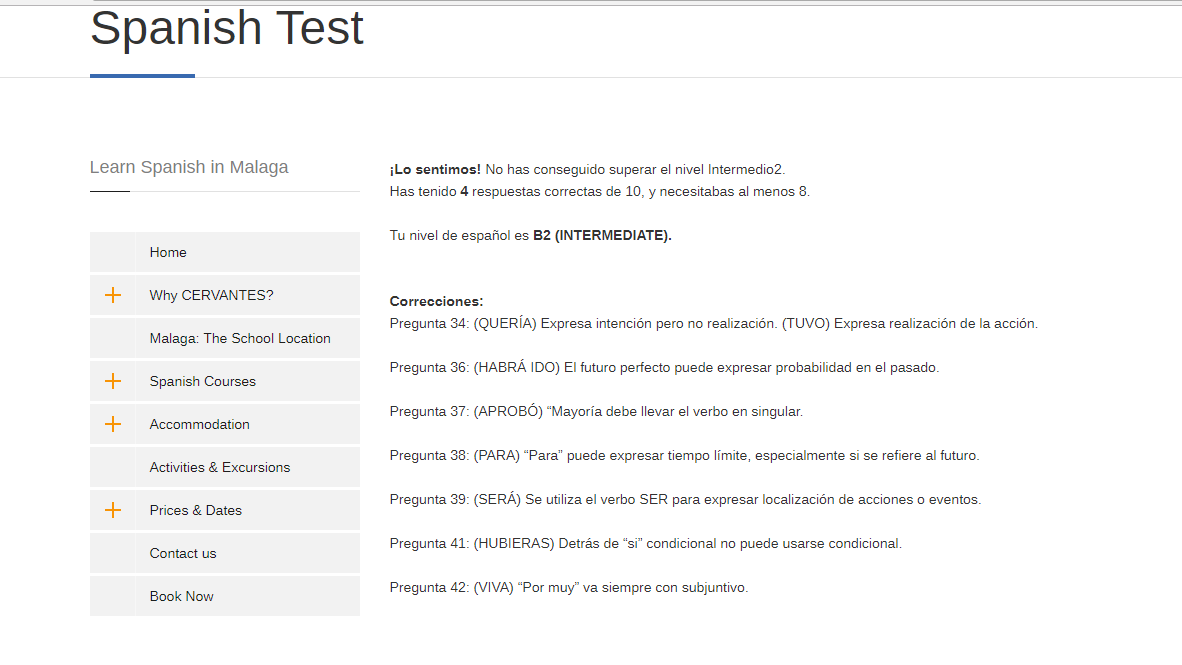 I’ll be the first to admit that while the online test isn’t the best determinant of my level. However, it is a good enough guideline to determine progress. 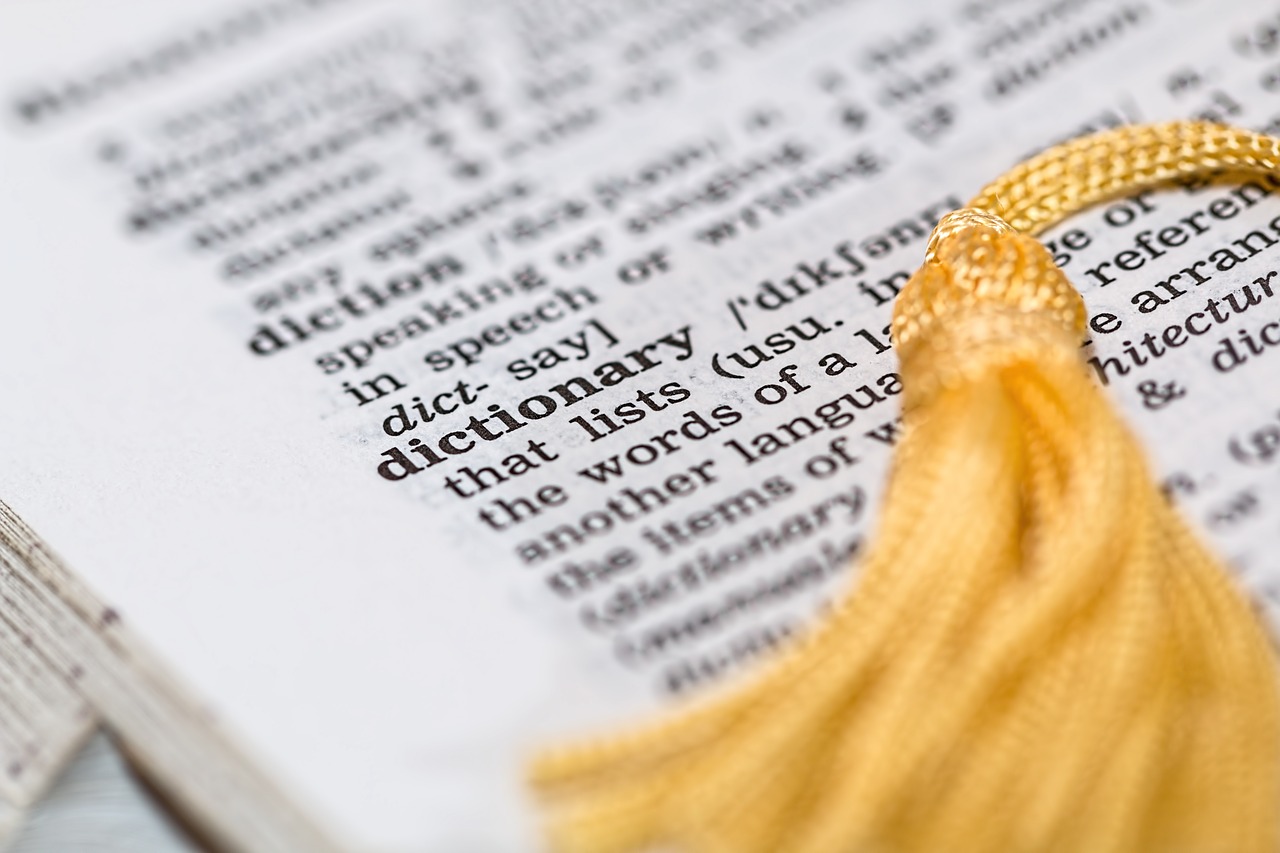 Whenever I do a challenge or project like this, I always do a debrief. I look at what worked, what didn’t and what I can do differently.

If I really think about it, there are a couple of things that worked very well. The first is that I created a structure to learn.

I did that by scheduling time to learn and study. I scheduled two 30-minute study sessions a day. I also learned along the way that it worked to break up my studies into three distinct areas: Vocabulary, Grammar, and Pronunciation.

Another thing that worked well was having the right tools to learn. I used flash cards for vocabulary, books for grammar, and Speechling and immersion for pronunciation practice.

The third thing that I did well throughout the 90 days was I recognized when I needed to make adjustments.

I created the schedule, but much like sailing a boat, you have to learn when it’s time to adjust the sails. For example, after I created the structure to study, I found that I needed to focus more time on learning grammar. I cut down on pronunciation studies to focus on grammar.

That move paid off. That move was the main reason why I was able to progress quickly.

What I Could Have Done Differently

When I look back on what I could have done differently, I think that there are a few areas where I could have improved.

The next learning lesson for me was to have done a better job sticking to the schedule, especially towards the end of the challenge. I had a few personal projects come up in the last 3 weeks of the challenge that threw off my study time. I still studied, but not as much as I could have in the last three weeks.

The final area of improvement is that I could have a better support system in place for moments of low confidence. I’ll get into more detail about confidence and how it relates to learning Spanish in a moment.

I will say that it does have a great impact on learning. I experienced this firsthand when I was in Spain trying to learn the language. There were days when I was enjoying myself, being out and talking to people. I didn’t mind if I was making mistakes.

To counter this, I could have used a support system to help. It could be just talking to someone to get my confidence back up quickly.

That’s one nice thing about using Speechling. If I felt like I was having a bad day and I didn’t want to talk, I could at least pick up the app and practice on my own. 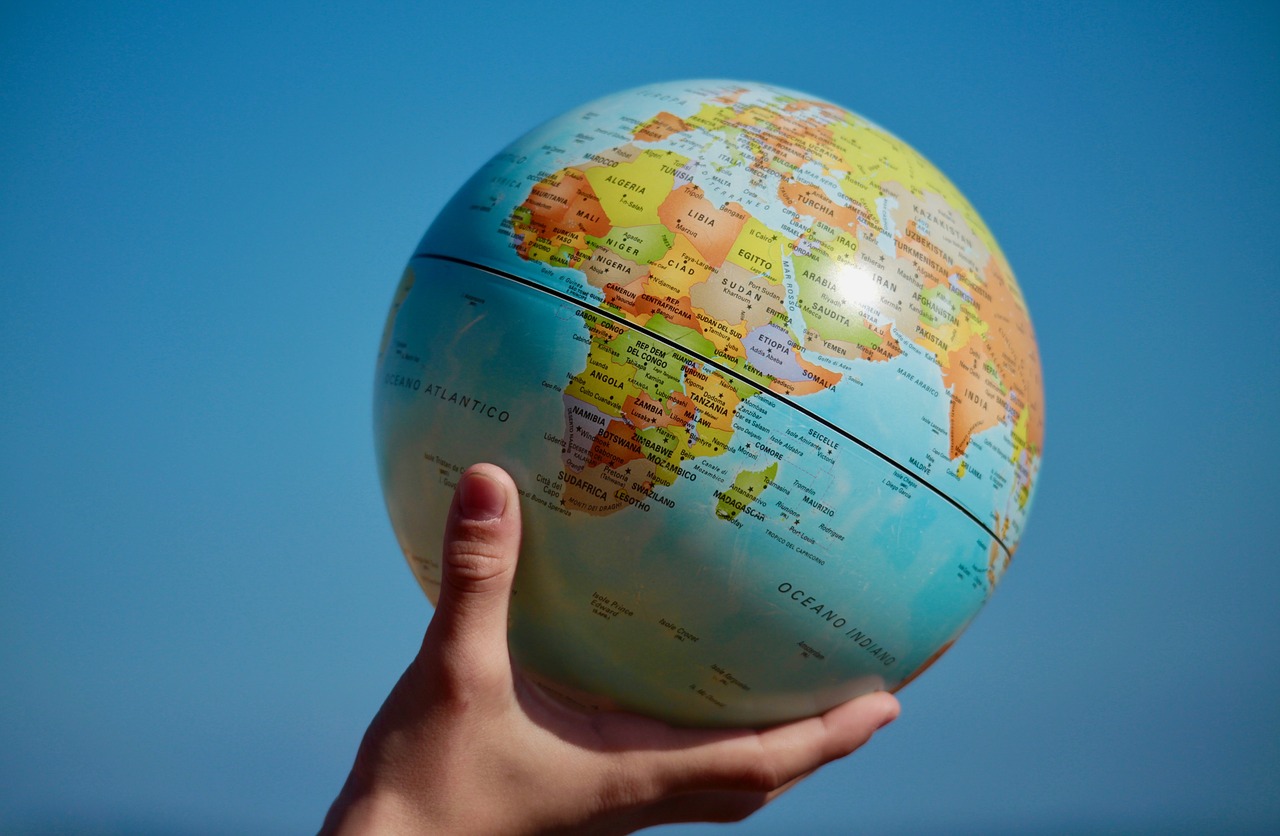 Confidence Plays a Major Role in Learning a New Language

Speaking of confidence, how does it impact learning a new language? According to a recent study by Kusan National University in Korea, a lot. The study examined 132 Korean students who had to take English oral exams.

The study found that the students with high confidence did great, while those with low confidence, did poorly. 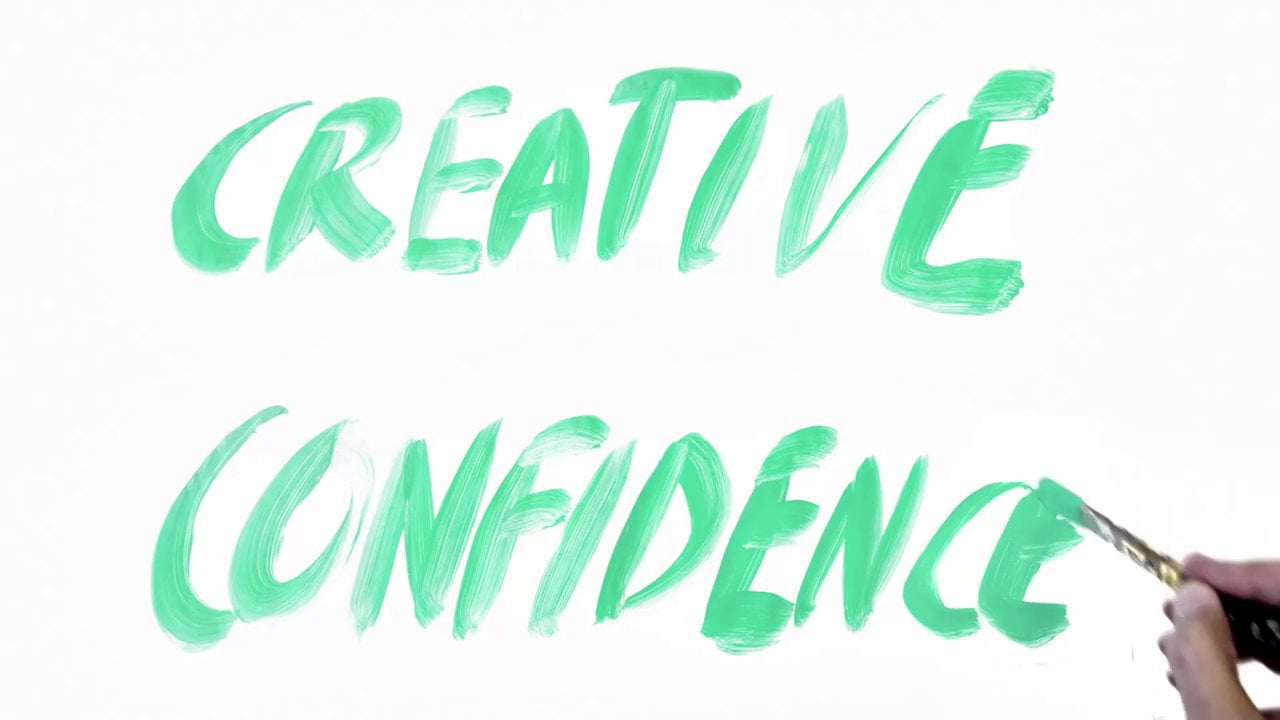 How Can You Maintain Confidence

The one thing I wish I had was a good support system that understood the challenges of learning a language.

If you’re learning a language, I highly recommend having 3-5 people in your network you can practice with. These have to be people you trust and feel safe with, even in your worst moments.

What’s Next in My Learning

As for what’s next in my learning, I’m always going to be a student. The thing about learning a language is that it’s a journey. And it’s a long one. It's funny when I think about how it took me three weeks just to say gracias correctly.

It's safe to say I've come a long way.

The best thing about this journey has been finding out what works for me and what doesn’t. I now have a go-to plan to study, even if it took me a while to figure out. I can implement that structure at any time. I know that it works.

Thanks so much for joining me along this journey.

I hope you learned a few tips for you to practice Spanish. Comment below and share your best tips for learning Spanish.