Playing cards originated in China and made their way to Europe in the 14th century. Different from the 52-card deck we know today, Italians have their own version of playing cards, which are sometimes referred to as Latin suits. Although cards and rules vary from region to region, the ones in this article will be the Napoletane patterns that are mostly used across southern and central Italy; moreover, the gameplay will be the simplest and most basic so that you can adapt to different variations when you play. 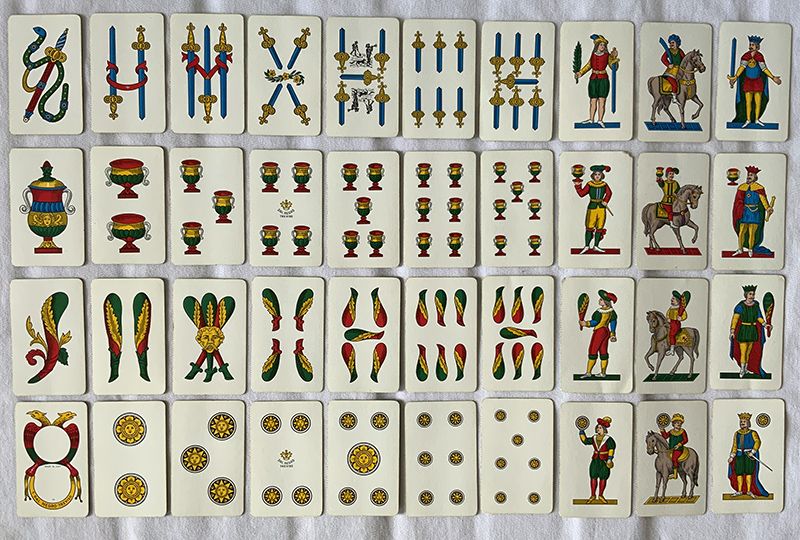 Before we look at the different games to play for learning Italian, let's learn some basic Italian vocabulary first.

These are some words and phrases you might come across while playing scopa, briscola, or tressette. These terms could vary by region, but these are some common phrases. Use these along with your basic Italian phrases to make the most out of your visit to Italy!

On top of the basic vocabulary terms, let's learn more Italian vocabulary from the cards. Similar to the 52-card deck, there are four suits or semi in a Mazzo. They are:
Swords - Spade
Cups - Coppe
Money/Coins - Denari
Batons - Bastoni

Additionally, there are only 10 cards per suit:
Ace - Asso (the asso di denari is special in the Napoletane version because it features a double-headed eagle with two open circles.)
Two - Due
Three - Tre
Four - Quattro
Five - Cinque
Six - Sei
Seven - Sette

There are some variations in cards and you might have
Queen - Donna (instead of the jack.)

Now that you know your Italian vocabulary for playing cards, games are a good way to break the ice, especially with locals, use your new vocabulary, and improve your Italian language skills. Although rules and points may vary from region to region here are three games with general instructions to get you started and befriend locals with whom you can practice your Italian. 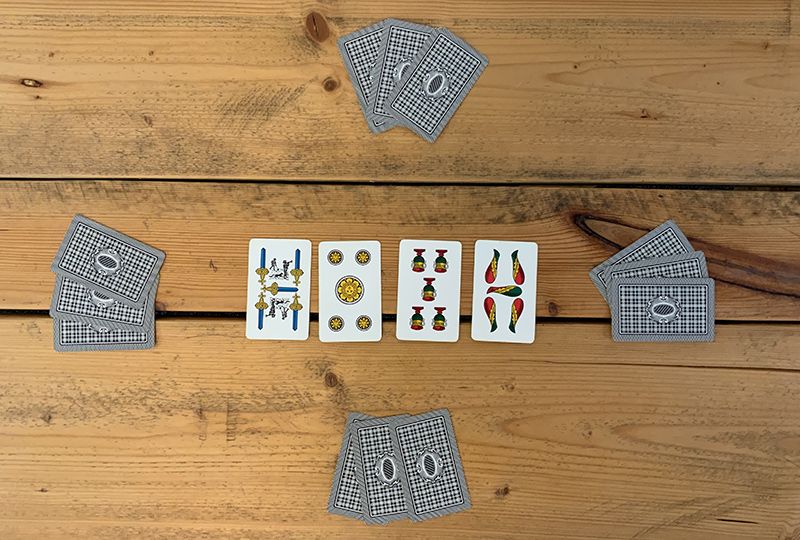 Scopa (literally “broom”) is a very popular game in Italy along with Briscola and Tressette. It has the name Scopa because you want to take a scopa, where you “sweep” the cards from the table. Scopa is usually played with 2 or 4 people. There are multiple rounds in Scopa and to win, you must get a total of 11 points.

First, the dealer deals each player three cards face down, and four cards face up in the middle. A player can capture a card or multiple cards by placing one card down and taking one card or multiple cards of equal value. For example, if you place a Fante (eight), you can take another Fante or take cards that make up that same value (two and six, or three and five). After you’ve taken the cards, you placed them face down in a separate pile of your own. Then, it’s the next player’s turn. If a player cannot capture any cards, they must put one card face up in the middle. It continues until the players run out of cards, in which case you deal three cards each again. In the case of a scopa, where a player takes the last card on the table, the player puts one card face up in his/her pile to signify a scopa (this is important for calculating points later on) and the next player will have to place a card in the middle. The round ends once there are no more cards to deal. The last player to take a card gets the remaining face-up cards; however, this does not count as a scopa. Each player counts their points and then they play a new round. The game continues until a player reaches 11 points in total. During play, make sure you annouce your cards you're taking in. Also, make sure to shout scopa when you make one. Practicing the words out loud is a good way to improve in language learning.

Punti (points) are gained from each scopa. Moreover, four additional points can be awarded. These are:
• carte (most cards)
• denari (most coin suits)
• sette bello (seven of coins)
• primiera (the most sevens) This point sometimes follows a different scale, which you can learn about in the link below, but for simplicity's sake, it’s whoever has the most sevens.

In the case of a tie, no points are awarded.

For a visual how-to, watch this video

This version is played in 2 teams of 2. The rules are the same except that the points of the players in a team are added together. 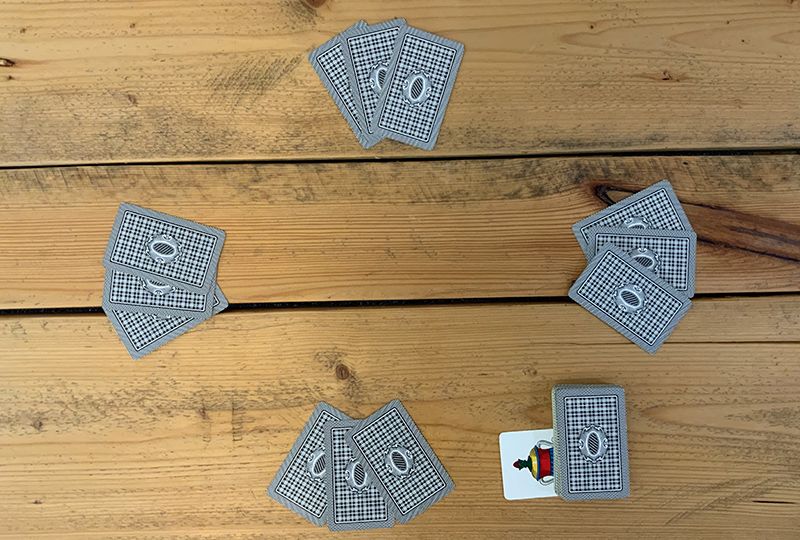 Like Scopa, Briscola is a popular card game in Italy. Briscola is the name of the trump suit as this is a trump card game that requires players to win tricks or rounds. This game can be played with 2-6 players as single players or in teams of two. The goal of the game is to get to the most points and it’s usually played best out of three or five rounds. Some variations also play to a certain amount of points.

You start by dealing three cards to each player, then one card face up. This decides the briscola or the trump suit of the round. From there, the play goes counterclockwise with the player to the right of the dealer going first. Thereafter, the winner of the trick draws first and leads the next trick.

The winning trick is based on the briscola (or trump suit) and the rank of the card. For example, if a player leads with a fante di denari, another player could win with

In Briscola, players don’t have to follow the leading suit (i.e. if the first player plays a spade, you can play denari or bastoni); however, unless you play a briscola, you won’t win the trick. This is a good game to practice your Italian numbers and math.

The table below shows the rank as well as the values of each card for calculating points at the end of the game.

The round ends, once the loser draws the last face-up card that decided the briscola.

For a visual how-to, watch this video

This is a five-player version that translates to declared briscola, where all cards are dealt out at the beginning (eight cards for each player). In this version, players auction for the briscola by calling the rank of their card. The winner of the bid then names the briscola and the holder of the winning bid card becomes their partner. Play this game to practice your speaking and listening skills as you have to listen/bid for your card.

You can learn more about this version by reading this article 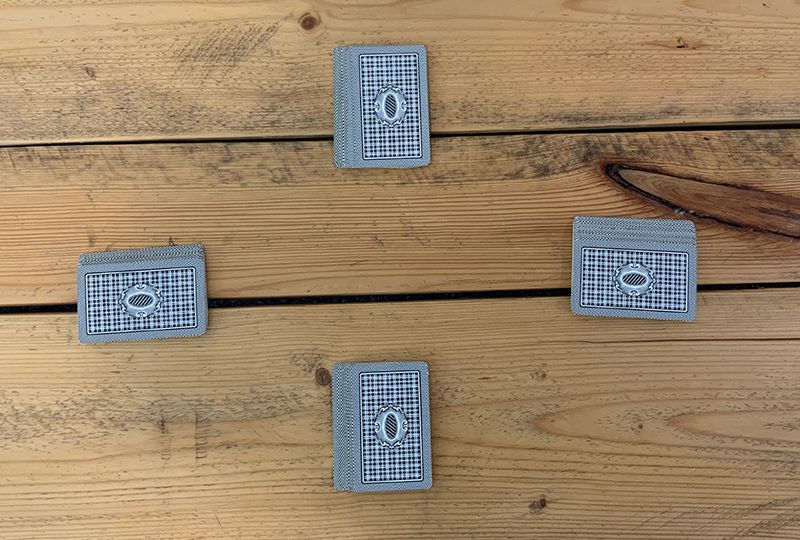 Tressette (literally “three seven”) is another popular trump game played in Italy. The name Tressette is said to come from the 1800s when having three sevens automatically wins the game. This is not the case anymore; however, the goal of the game is to earn 21 (3x7) points. This game can be played with 2 or 4 players and can be played individually or in teams.

Begin by dealing ten cards to each player and put the remaining cards aside (if two players). From there, the play goes counter-clockwise with the player to the right of the dealer going first. Unlike briscola, players must play the same suit unless they do not have any cards of the leading suit.
The table below shows the rank as well as the values of each card for calculating points at the end of the game. The points are calculated in thirds: one third is un terzo and two thirds is due terzi in Italian.

The scores are rounded down (i.e. if you scored 5⅓, you’d get 5) and the winner of the last trick also gets 1 point added to their score.
The players then played another round until one player or one team reaches 21 points in total. This is another game that practices your math and number vocabulary.

For a visual how-to, watch this video.

In the napolitana version, players get a bonus of 3 points by having three, two, and ace of the same suit in their hand and declaring it. Traditionally, one card is turned over to keep track of the bonus points, similar to when taking a scopa.

How to Learn Italian in Fun Ways

Speechling has a great article on Italian pronounciation so that you can say the words/phrases correctly. You can also practice your new vocabulary using online tools such as the freestyle mode on Speechling. Your Italian coach will help to reach to a native speaker level.

Now you’ve learned three common Italian playing card games and vocabulary. When you have a chance to visit Italy, go out and play with some locals to practice your Italian in a fun way!