Eating to learn, learning to eat as a Mandarin Chinese learner

Chinese food is often the keystone in many people's lives. A solid foundation of food vocabulary will boost your Chinese speaking capabilities and is sure to lubricate many a conversation.

Food is paramount in China, and many diverse cultures and traditions are based on it. Food as gift, food as sacrifice, food as heritage, food as ritual - most festivals involve some kind of preparing, consuming or exchanging of food stuffs, for example, rich mooncakes during the Mid-Autumn Festival, rice dumplings for the Dragon Boat Festival. If learning about and understanding culture is the key to learning a language, then learning about Chinese food is key to learning Mandarin. 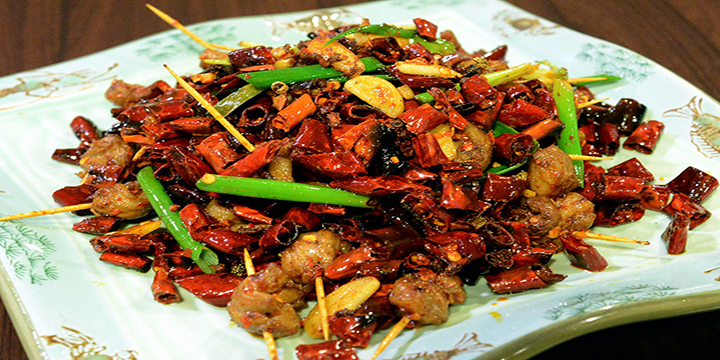 This phrase is reserved for only the tastiest of eats in China. The idea of Chinese food is extremely nebulous and hard to define, given that there dozens of provinces and autonomous regions, each with their own proud culinary history and style. However, food is a central cog in the existence of many Chinese people, and by understanding some of the key dishes’ history and traditions you’ll be able to have a deep (and often meandering) conversation with almost all Chinese speakers. These dishes may not be listed on many Chinese food menus outside of the mainland, but they are certainly worth investigating. 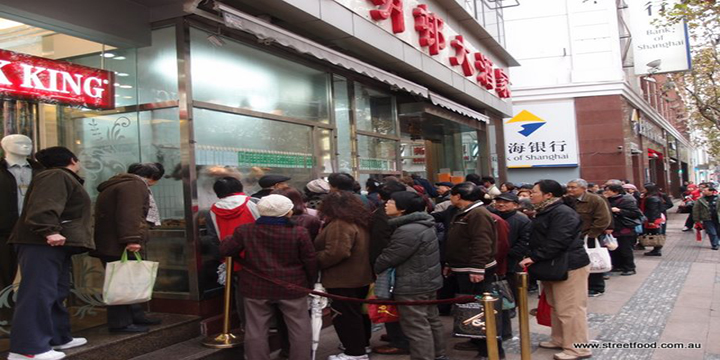 The Importance of Food

Food plays a vital role in Chinese life, and gaining an overview of its significance and place in Chinese culture and tradition will give you a useful insight into the mechanisms of Chinese society. Whilst alcohol is popular in China, it does not carry the same social connotations as in other countries, particularly those in the west. As a result, when friends want to meet and socialize, the most common option would be to meet for some kind of meal, be it late-night street noodles, a Chinese New Year speciality, a banquet style dinner or one of the other types of delectable meals listed below. 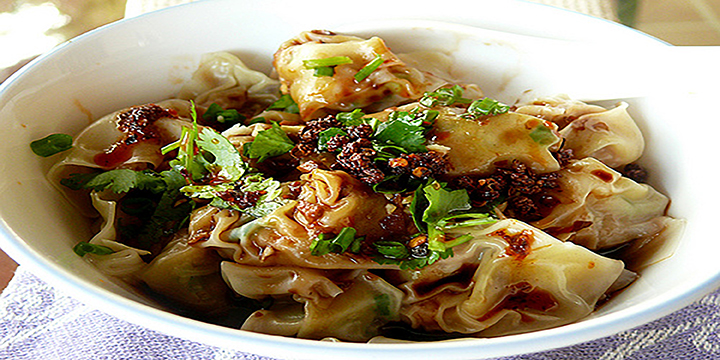 A great place to begin is the humble dumpling. Though especially popular in Beijing and other parts of North-East China, dumplings are eaten all year round, all hours of the day. Dumplings assume manifold moulds and mutations with three of the most popular forms of dumpling being wonton (húntún - 馄饨), boiled dumplings (shuǐjiǎo - 水饺) and fried dumplings (guōtiē - 锅贴).

Wonton comes in many varieties, though a particular favourite is chāoshǒu - 抄手, which literally translates as folded arms, referring to how these are folded and sealed. Served in a clear soup with spring onion, or for maximum flavour a pungent, potent mix of chilli oil, sesame oil and ginger, chāoshǒu - 抄手 always hit the spot.

Shuǐjiǎo - 水饺 is another popular form, and although dumplings can also arrive steamed (Zhēng jiǎo - 蒸饺), it's more popular sibling and more readily available. Boiled dumplings also have an important place in Chinese culture and tradition, as it is common for families to prepare and cook dumplings together over the Spring Festival holiday, and it has long been seen as a bonding pastime.

A final mention is for the delightful fried dumplings (guōtiē - 锅贴), which translates as stuck to the pan. These crunchy pockets of joy are often sold on the street by hawkers and food vendors, and serve as a perfect snack to accompany a brisk stroll, long walk, or just about any occasion. A great way to integrate yourself into Chinese culture is to meet with Chinese friends and make dumplings. This is a very traditional pastime and an excellent opportunity to chat and show off our dumpling knowledge. 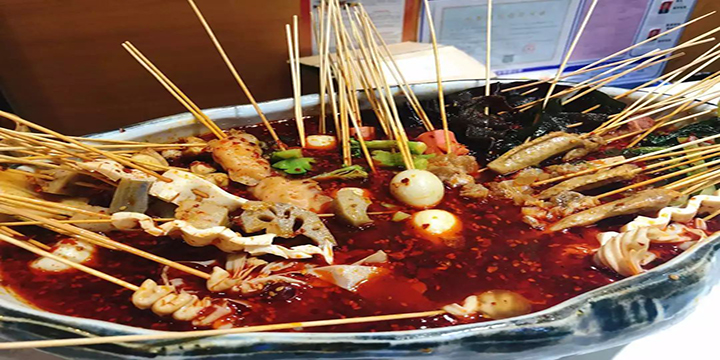 Next up is a dish that is treasured in South-West China – Hotpot (火锅 - Huǒguō). Originating in Chongqing, Hotpot (火锅 – Huǒguō) is a fiery meal that is close to the heart of many people from Yunnan, Shaanxi and Guizhou, though especially cherished in Sichuan. The style of Chongqing Hotpot (火锅 – Huǒguō) is relevant to the climate of Chongqing, which is humid and damp. The proliferation of heat and spice in the dish is thought to drive away moisture from the body, maintaining health. Hotpot (火锅 – Huǒguō) is essentially a large vat of spicy, bubbling oil infused with copious amounts of chilli, Sichuan peppercorn and a host of other spices. Then you order a plethora of items that are to be boiled in this fiery potion until ready to eat. There’s a huge range of foods that can be lobbed in the pot, with more exotic options including thousand layer stomach (千层肚 - qiāncéngdù) and duck blood (鸭血 - yāxuè).

Due to the set-up of Hotpot (火锅 – Huǒguō) it is a highly sociable meal. Special mentions go to chuànchuàn (串串 - translating as a skewered or strung together thing), which is similar to hotpot (火锅 – Huǒguō), though the food has been pre-impaled on wooden sticks (a great way to circumnavigate chopstick difficulties) and màocài (冒菜), which is similar to chuànchuàn, though your skewered food is prepared and cooked for you and only served in a hot soup. Hotpot (火锅 – Huǒguō) is a fantastic method of improving your Chinese ability, as instead of ordering entire dishes as with other Chinese meals, you can get the chance to order single components, therefore becoming more familiar with various ingredients such as vegetables, fruit, meat and fish. 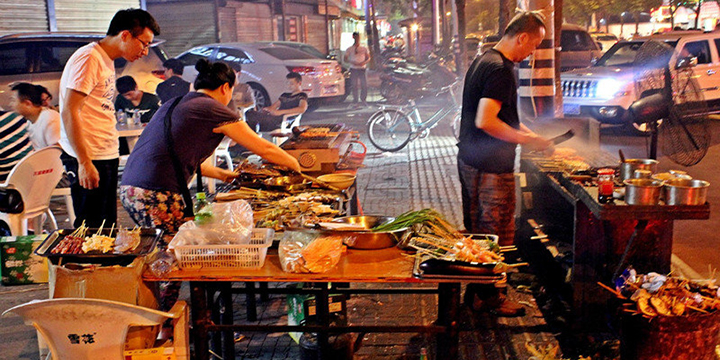 Whilst I mentioned earlier that China doesn’t have the same drinking culture as in the West, that is not to say it is a teetotal nation. Drinking báijiǔ (白酒 – the most popular spirit in China) is a common way to commemorate a celebration or seal a business deal, and increasingly young people in China spend their Friday and Saturday nights in bars and clubs. One food that is definitely associated with this is shāokǎo (烧烤). Shāokǎo (烧烤) is similar to chuànchuàn (串串) and màocài (冒菜) in that the food has been pre-speared and skewered, though instead of being cooked in a pot of molten oil the food is grilled over a barbeque, often with generous lashings of chilli powder, cumin, black pepper and any number of idiosyncratic spice mixes.

There are many shāokǎo (烧烤) shops, though as this food tends to cater for creatures of the night, the vendors normally operate a mobile trade, affixing all of the necessary grilling goods and gadgets to the back of a bicycle or tricycle. These then pop up city-wide, sometimes until as late as 6am. A variety of eggs, beans, tofu, fish, meat, greens, mushrooms and mántou (馒头) are usually available, and you can sometimes get your grilled items fried up with glass noodles or rice. There is no better way to meet new people and friends than a late night shāokǎo (烧烤), and as with hotpot (火锅 – Huǒguō), a fantastic chance to become more familiar with different food names and ingredients. 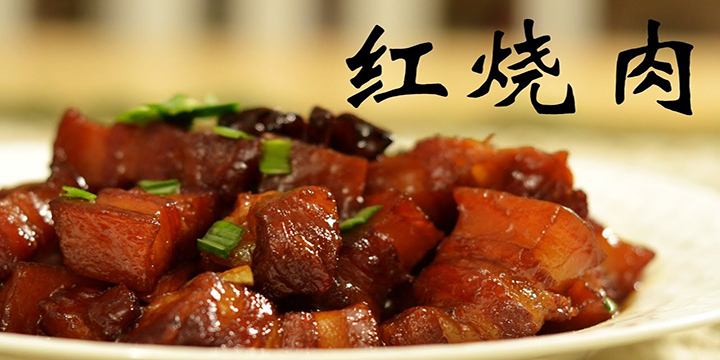 Perhaps the ultimate method of sharing food, and the one most commonly replicated in Chinese restaurants outside of China, is going for dishes. Different regions specialize in different dishes, but here we’ll look at hóngshāo ròu (红烧肉), gōng bǎo jī ding (宫保鸡丁) and guō bāo ròu (锅包肉).

Hóngshāo ròu (红烧肉) is a dish originating in Hunan, and was reportedly Chairman Mao Zedong’s favourite dish. The standard form of this dish is made using chunks of succulent belly pork, braised for an age in an unctuous blend of garlic, sugar, ginger, soy sauce and a range of fragrant spices. Although it is common throughout China, hóngshāo ròu (红烧肉) can be most frequently spotted on special occasions such as weddings and annual dinners.

The final dish is guō bāo ròu (锅包肉), native to the North-East and in particular the arctic winds of Harbin. As with most North-Eastern food, chilli does not really feature in this dish, instead relying on sweet syrup and rice vinegar for flavour. Outside of China, this dish is most commonly associated with the ubiquitous ‘sweet and sour’ flavour that can be found in Chinese restaurants worldwide.

A base knowledge of some of China’s most famous dishes will furnish you with the tools required to vist a Chinese restaurant and begin using your new vocabulary. The more you can immerse yourself in Chinese speaking enviroments, the more rapidly your language level will improve. You can find more etiquette about eating out with Chinese Friends in China. For advice on other ways to engage Chinese culture and environments please check out the following article, novels, and movies. Good luck!